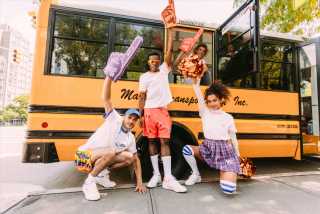 Adidas finally confirmed on Monday that it is exploring options for its Reebok division.

Reports have been circulating for months that the German activewear company was looking to sell the brand, which it acquired in 2006.

Adidas said that since it implemented its “Muscle Up” turnaround plan in 2016, results at Reebok were “significantly” improved and the brand returned to profitability in 2018, two years earlier than originally projected. In 2019, Reebok’s global sales increased 2 percent on a currency-neutral basis compared to the previous year, driven by double-digit growth in North America.

In the third quarter of this year, Reebok’s revenues were down 7 percent, Adidas said, and 20 percent in the nine months, as a result of the pandemic.

Authentic Brands Group has been mentioned as a possible acquirer of the brand and its chief executive officer, Jamie Salter, has made no secret of his interest in the label. Shaquille O’Neal, who is a partner with ABG, said more than a year ago that he would love to buy Reebok, a brand he had endorsed in the Nineties. Salter could not immediately be reached for comment.