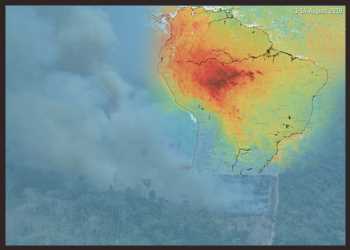 Updated satellite images by the European Space Agency show heavy air pollution caused by the Amazon fires in Brazil with concentration of carbon monoxide and other pollutants in August.

Wildfires have been raging in a vast region of Brazil’s Amazon rain forest for the past many weeks.

A preliminary government data released last week said deforestation in the region rose in the eight months through August by 92 percent when compared to last year.

The fires are not only an environmental tragedy in terms of lost forest and biodiversity, but they are also leaving their mark on the atmosphere, affecting air quality and, potentially, the global climate.

The Amazon is a vital carbon store that slows down the pace of global warming.

Consumed by fires in recent months, Amazon forests are releasing much of the carbon dioxide they once stored in their biomass, back into the atmosphere.

The European Space Agency’s Copernicus Sentinel-5P mission has been closely monitoring the changes in air quality, and mapping a number of trace gases.

Data from the satellite shows a massive increase in carbon monoxide in the air following the fires. ESA said in a press release that it can cause problems for humans by reducing the amount of oxygen that can be transported in the bloodstream.

One of the images shows higher amount of formaldehyde was released from fires this year compared to 2018.

The U.S. National Toxicology Program described formaldehyde as “known to be a human carcinogen.”

The animation shows smoke and aerosols over Brazil. When breathed in, these small particles can lead to cardiovascular conditions and lung problems, says ESA.

Aerosols also affect the climate by scattering and absorbing of incoming sunlight and trapping of outgoing long-wave radiation, which results in warming the planet.

“On August 19-20, the smoke from fires got so bad that the day appeared to be turned into night as São Paulo was plunged into darkness.”

Deutsche Bank May Merge With Its Rival: Here’s How It Will Look