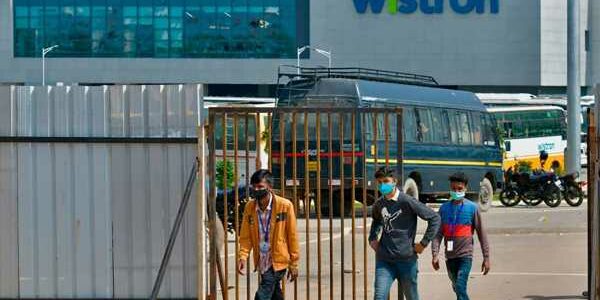 Apple Inc. said it’s placing a supplier in India on probation after lapses in labor practices led to rioting, and will hold off giving new orders toWistron Corp. until the problems are fixed.

Preliminary investigations showed the Taiwanese company, the first Apple supplier to produce iPhones in India, failed to implement proper working hour management processes which led to payment delays for some workers in October and November, Apple said in a statement on Saturday.

Earlier this month, Wistron workers at a plant in Narasapura near Bengaluru rioted over unpaid wages, with many arrested for violence and vandalism. They damaged property and looted thousands of iPhones and laptops, according to local media.

People with knowledge of the matter said Wistron’s rapid hiring and expansion in India stretched the company’s systems and sapped the bandwidth of its management team, as well as its human resources department.

“Wistron has taken disciplinary action and is restructuring their recruitment and payroll teams in Narasapura,” Apple said. “We have placed Wistron on probation and they will not receive any new business from Apple before they complete corrective actions. Apple employees, along with independent auditors, will monitor their progress.”

Wistron said it removed the vice president who was overseeing operations in India, and has started a telephone hotline for workers to voice their concerns anonymously.

“This is a new facility and we recognize that we made mistakes as we expanded,” the Taiwanese company said in a statement on Saturday. “We are deeply committed to our business and employees in India. We are working diligently on corrective actions to ensure this does not happen again.”

Apple and its suppliers had been criticized in the past for allowing poor labor conditions in China. Last month, Applesuspended new business with Wistron’s larger rivalPegatron Corp. after discovering labor violations at a student workers’ program, taking strong action to clean up a Chinese-based production chain long accused of worker abuse.