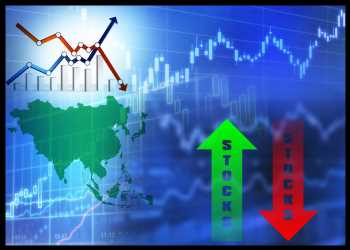 Asian stock markets are mixed on Tuesday despite the positive cues overnight from Wall Street following upbeat U.S. economic data and on hopes of an economic recovery in China. Worries over a spike in coronavirus cases in some U.S. states and other parts of the world weighed on investor sentiment.

Investors are also looking ahead to the Reserve Bank of Australia’s monetary policy decision later today. The RBA is widely expected to keep its benchmark lending rate unchanged at a record low of 0.25 percent.

Among the major miners, Fortescue Metals is gaining more than 4 percent, BHP Group is advancing more than 1 percent and Rio Tinto is adding almost 1 percent.

In the oil sector, Santos is declining 0.6 percent and Woodside Petroleum is down 0.2 percent, while Oil Search is up 0.3 percent after crude oil prices ended almost flat overnight.

In the banking space, ANZ Banking, Westpac and National Australia Bank are all rising 0.4 percent each, while Commonwealth Bank is edging down 0.1 percent.

Downer EDI said it has won contracts worth A$420 million, which are for a maximum term of 13 years, to maintain roads in South Australia’s Metropolitan Zone and Regional North Zone. The engineering contractor’s shares are rising more than 1 percent.

Dexus said it has acquired a Ford distribution centre in Victoria and an industrial site in Sydney for A$173.5 million, taking its industrial property portfolio to over A$5 billion. The developer’s shares are adding 0.3 percent.

Afterpay said it is raising A$800 million through a share sale, consisting of an institutional placement worth A$650 million and a share purchase plan for retail shareholders worth A$150 million. The e-commerce provider’s shares are in a trading halt pending completion of the institutional sale.

In the currency market, the Australian dollar is almost unchanged against the U.S. dollar on Tuesday. The local unit was quoted at $0.6975, compared to $0.6972 on Monday.

The Japanese market is modestly lower in choppy trading despite the positive cues overnight from Wall Street, while the safe-haven yen strengthened against the U.S. dollar.

Investor sentiment was dampened due to the rising number of new coronavirus cases in Tokyo and data showing that Japanese household spending tumbled at the fastest pace on record in May.

The major exporters are lower on a stronger yen. Sony is losing almost 1 percent, Mitsubishi Electric is lower by 0.5 percent and Canon is down 0.4 percent, while Panasonic is adding 0.5 percent.

In the financial sector, Mitsubishi UFJ Financial is declining almost 1 percent and Sumitomo Mitsui Financial is down 0.5 percent.

In the tech space, Advantest is rising more than 3 percent and Tokyo Electron is higher by almost 2 percent. Among automakers, Honda is lower by more than 1 percent and Toyota is declining almost 1 percent.

In the oil sector, Japan Petroleum and Inpex are losing more than 1 percent each after crude oil prices ended almost flat overnight.

Among the other major gainers, Yamato Holdings is gaining more than 4 percent, while Cyberagent, Rakuten and M3 are all rising more than 3 percent each.

In economic news, the average of household spending in Japan was down 16.2 percent on year in May, coming in at 252,017 yen. That missed expectations for a drop of 12.2 percent following the 11.1 percent decline in April.

Japan will also release May numbers for its leading and coincident indexes.

In the currency market, the U.S. dollar is trading in the lower 107 yen-range on Tuesday.

On Wall Street, stocks closed higher on Monday after Chinese shares skyrocketed on the day amid positive commentary on the market from state media. Traders also remained generally optimistic about the U.S. economic outlook following last Thursday’s better than expected jobs data. In the latest sign of the rapid economic recovery, the Institute for Supply Management released a report showing a substantial turnaround in U.S. service sector activity in the month of June.

The major European markets also showed strong moves to the upside on Monday. While the U.K.’s FTSE 100 Index jumped by 2.1 percent, the German DAX Index and the French CAC 40 Index rallied by 1.6 percent and 1.5 percent, respectively.

Crude oil futures settled slightly lower on Monday after swinging between gains and losses as traders weighed energy demand prospects and fears of another lockdown amid a surge in new coronavirus cases across the globe. WTI crude oil for August delivery edged down $0.02 to $40.63 a barrel.