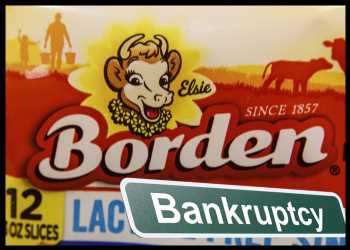 Dallas-based Borden cited the impact of the rising cost of raw milk and market challenges facing the dairy industry as reasons for its bankruptcy filing.

Borden, founded in 1857, said it filed for voluntary reorganization proceedings in the District of Delaware under Chapter 11 of the Bankruptcy Code.

The company intends to use the court process to pursue a financial restructuring designed to reduce its current debt load which it called “unsustainable,” maximize value, and position the company for long-term success.

In court filings, Borden reported net loss of $42.4 million for the period from January to December 2019.

The company said it was facing a multi-year trend of shrinking margins and increasing competition, noting that raw milk prices rose 27 percent in the past year.

Borden also noted that total U.S. consumption of conventional dairy milk declined 6 percent since 2015, and more than 2,700 family dairy farms went out of business since mid-2018.

Borden said it plans to continue operating in the ordinary course of business under the court’s supervision.

“Borden is EBITDA-positive and growing, but we must achieve a more viable capital structure. This reorganization will strengthen our position for future prosperity,” said Borden CEO Tony Sarsam.

According to Sarsam, Bordern was engaged in talks with its lenders to evaluate potential strategic plans for the company, and ultimately decided the best way was to reorganize through a court-supervised process.

The company said it pro-actively filed expected motions as part of the court-supervised process, which allow it to pursue day-to-day operations.

In November, Dean Foods said it voluntarily filed for Chapter 11 bankruptcy protection and it was working toward an orderly and efficient sale of the company.

Dean Foods revealed that it was impacted by a challenging operating environment marked by continuing declines in consumer milk consumption.

Trouble for seniors, what it’s like to be Big Bird and more retirement news