On Tuesday, California Governor Gavin Newsom took a victory lap on Tuesday after the arrival of the first 32,000 doses Covid-19 vaccine. “There is light at the end of the tunnel,” he said. But there was a lot of darkness in the numbers he later announced.

At his news conference, the governor ran through the distribution of the initial 327,000 doses from Pfizer, 60% of which could be delivered on Tuesday. Newsom announced an additional 393,000 from Pfizer as early as next week. The total number of doses delivered by the end of the year, could rise to 2.1 million, he said.

The first phase of the vaccine rollout will inoculate 3 million mostly frontline healthcare workers.
The second phase will inoculate 8 million others, which could include teachers, farm workers, grocery story workers. The workers included on that list are still being firmed up by a state working group.

The governor reported 32,326 new cases in the state over the past 24 hours. Even more grimly, California had seen 142 deaths. Newsom said that 163 people had been lost to the virus on average over the past 7 days. “This is not something to be trifled with,” he said. “Think about what the January number may look like if we continue [like this].”

Newsom then announced that the state had activated mutual aid among the state’s coroners. That means if one area’s coroners are overwhelmed, they can call on those from nearby regions for help.

“We have orders for 63 refrigerated units,” he said. “We just had to order 5,000 additional body bags and distribute them down to San Diego, L.A. County.” Newsom said his intention was not to scare Californians, but the gravity of the announcement was hard to ignore. 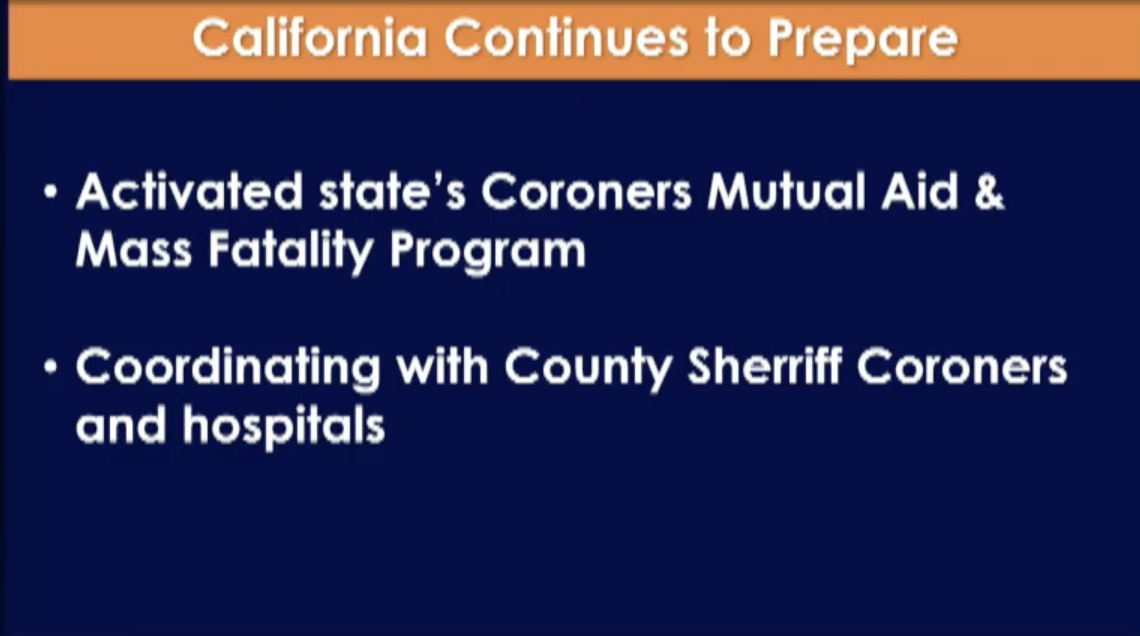 The state had a 14-day test positivity rate of 10.7% on Tuesday. “We haven’t seen a positivity rate like that since the very early days of the pandemic,” said Newsom, “when only a few people were getting tested.” The good news is that the 7-day positivity rate, which has regularly been above the 14-day rate, was now about the same as the 14-day measure.

That may mean, as the state delivers a record number of tests near or over 300,000 daily, that the true spread of the virus in the state’s population may be finally indicated by the positivity rate. It could also mean that the numbers of those infected with the virus is beginning to plateau which, despite the record-high numbers, would be relatively good news.

The state had 3,081 ICU beds occupied by Covid-19 patients. Statewide, ICU capacity stood at 5.7%. Some areas of the state were critically low.

As of Tuesday, Southern California reached an all-time low of 1.7% of ICU bed capacity left.

Dr. Christina Ghaly, Director of L.A. County Health and Human Services, said on Monday that there were only 370 available hospital beds for the county of 10 million. ICU availability was even worse, with just 56 adult ICU beds remaining. That is only the second time availability has dipped below 100, she said.

Orange County on Monday set new records for new coronavirus diagnoses — 3,250 — and hospitalizations, with the county’s adjusted intensive care unit capacity reaching zero. While that capacity was about 11% over the weekend, it has obviously since fallen. And the adjusted rate filters out capacity such as NICU beds for children. For comparison, Orange County’s daily positive case count was 1,056 on November 29, so the daily umber has risen over 200% in just 2 weeks.

One method of regulating bed capacity is “diversion,” in which an ambulance is diverted to a hospital — possibly farther away — that has more beds. “We are aware that there are certain hospitals in the county where offload time can exceed four hours,” revealed L.A. County Health Director Barbara Ferrer. “That’s why we need the diversion system.”

On Sunday, a day when emergency departments are traditionally not as busy, 81% of the 911-receiving hospitals in L.A. asked to have advanced-life-support ambulance traffic diverted to other medical facilities due to overcrowded ERs. The average of hospitals requesting diversion this time of year is normally 10% to 15%, Ghaly said last week.

The San Joaquin Valley got to 0% ICU capacity over the weekend, said the governor. That region “went into a surge frame,” said Newsom, which meant it had to take less than optimal decisions about how to care for patients.

On Friday, the state had issued emergency permission for ICU units to increase the number of patients for each nurse from 2:1 to 3:1. Newsom also went over additional staffing that has been secured and requests that have gone out to the federal government for aid. 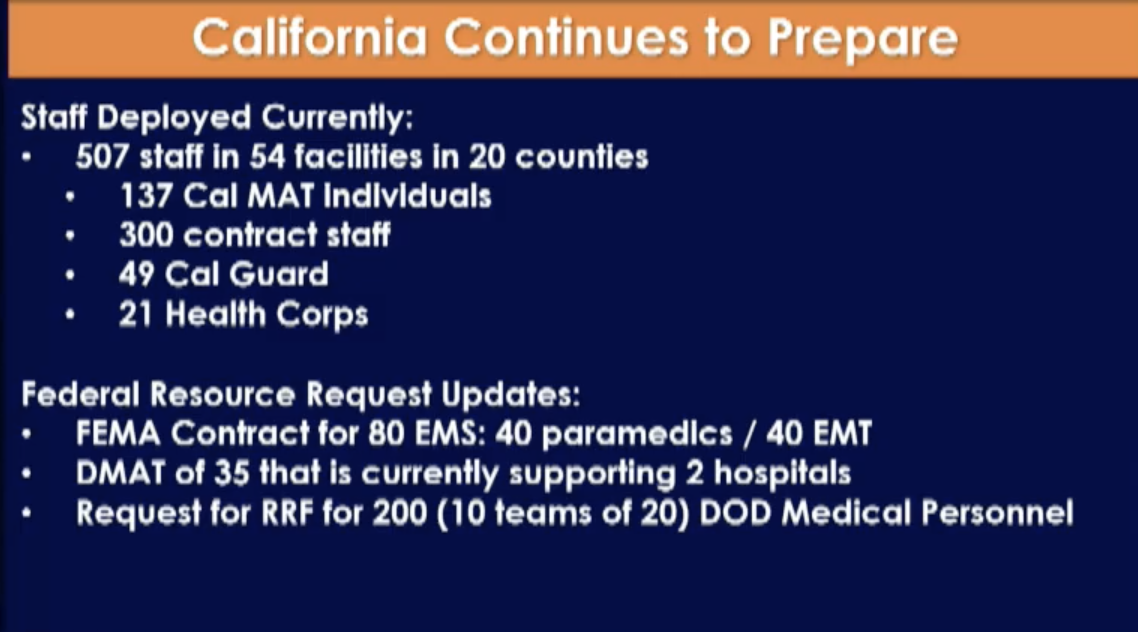 On Monday, Newsom and other elected officials gathered at Kaiser Permanente to watch the initial doses begin administered, and while they said the vaccine offers hope, there is a long way to go in the coronavirus fight.

“Don’t stop doing what’s right, and keeping that distance and wearing that mask, … making sure you wash your hands, and stay away from each other,” Mayor Eric Garcetti said. “It is not the time to let up.”

According to Newsom, 33,150 vaccine doses were received at four sites in California as of Monday — Los Angeles, San Diego and two sites in Northern California. Vaccines will arrive at 24 more sites statewide Tuesday, and five more on Wednesday.

“The arrival of the COVID-19 vaccine signifies a powerful and positive shift change for our community after months of fear, exhaustion and illness,” said Dr. Jeff Smith, chief operating officer of Cedars-Sinai.

“Until today, the vaccine was the missing tool in our ever-growing toolkit of treatments and prevention methods against the virus.”

The medical center has capacity to house more than 450,000 doses of the vaccine onsite in several ultra-cold freezers, and health care workers in Cedars-Sinai’s intensive care units and emergency department will be among the first to be offered vaccinations, which are voluntary, Smith said.

But offering some context, Newsom noted that the 33,150 doses received as of Monday roughly equated to the number of new COVID-19 cases confirmed across the state in the past day.

The state was expecting to receive 327,600 doses in the first allotment. Newsom confirmed the arrival of that shipment on Monday.

Pending federal approval of a Moderna vaccination, the state could receive another 672,600 doses within a week, and as many as 2.16 million doses by the end of the year.

Los Angeles County’s initial allotment of Pfizer vaccine is expected to be 82,875 doses, a population-based percentage of the state allocation, according to county Public Health Director Barbara Ferrer.

UCLA Health officials said they expected to get the vaccines by Tuesday, with shots administered on Wednesday.

The Moderna vaccine, which received initial FDA approval Tuesday but is still awaiting a final OK, does not require the same ultra-cold storage as the Pfizer vaccine.