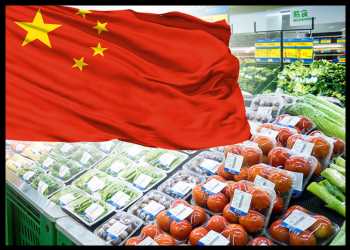 China’s consumer price inflation rose to a six-month high in April, and producer prices increased more-than-expected at the fastest pace in four months, data from the National Bureau of Statistics revealed on Thursday.

The consumer price index rose 2.5 percent year-on-year in April, following a 2.3 percent increase in March, in line with economists’ expectations. The latest inflation was the highest since last October.

On a monthly basis, consumer prices edged up 0.1 percent in April, after a 0.4 percent fall in the previous month.

Separate data from the National Bureau of Statistics showed that the producer price index rose 0.9 percent yearly in April, following a 0.4 percent increase in March. Economists had forecast a 0.6 percent rise.

On a month-on-month basis, producer prices rose 0.3 percent in April.

“The upshot is that supply-side factors appear to have pushed up both CPI and PPI last month,” Capital Economics economist Julian Evans-Pritchard said.

“But with core CPI moving in the opposite direction, there are still few signs of a demand-driven pick-up in inflationary pressures.”

Capital Economics do not expect further upside to PPI and non-food CPI as economic growth is unlikely to stage a strong recovery and industrial commodity prices are likely to drop back before long.

Elsewhere on Thursday, data from the central bank showed that new yuan loans given by Chinese banks totaled CNY 1.02 trillion in April, which was well below analysts’ expectations, and March’s CNY 1.69 trillion.

The broad money supply measure of M2 grew 8.5 percent year-on-year in April, which slower than the 8.6 percent growth in March.