Home » Business » Coronavirus Hastens the Rise of the Cashless Economy 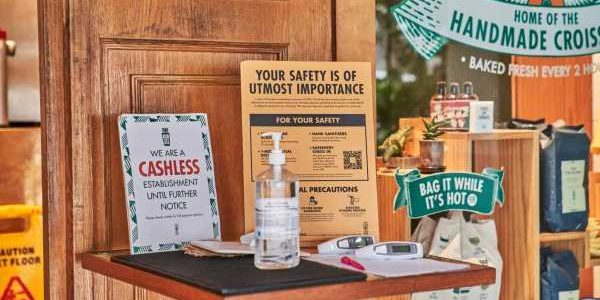 Coronavirus Hastens the Rise of the Cashless Economy

When Atlanta restricted restaurants to take-out and delivery service only in mid-March to slow the spread of the coronavirus, the Castellucci Hospitality Group decided that all seven of its restaurants would no longer take cash. Owner Fred Castellucci said he’d considered the move even before Covid-19, since 90% of sales were already made through credit and debit card, but held off on making the switch out of concern that it would exclude customers.

“The pandemic has changed things,” he says. “Now our primary focus is the health and safety of our customers, employees and our community.”

His restaurants have implemented a slew of protocols since reopening for dine-in services in June, including spacing out tables and distributing single-use menus. At Iberian Pig, his Spanish tapas restaurant, they’ll soon start testing a contactless system that allows diners to pay by scanning a QR code with their smartphone.

Castellucci isn’t sure if it will catch on or if he’ll expand it to his other operations, but one thing’s for sure: He doesn’t plan on accepting cash again — and he’s not alone.

Churches Are Building Housing Developments ‘in God’s Back Yard’

How Sydney Adapted a Classic British Terrace House for the Sunshine

Earlier this year, Atlanta’s Mercedes-Benz Stadium touted $350,000 in savings after becoming the first professional sports venue to go completely cash-free in March 2019. When it held a virtual seminar this May to teach others about the transition process, more than 200 local hospitality and entertainment companies — including Castellucci, which operates an Iberian Pig location inside the venue — tuned in. “The pandemic just takes what was a slam dunk and makes it a necessity,” Steve Cannon, CEO of the stadium’s parent company, told the Atlanta Business Chronicle.

Across the globe, Covid-19 is fueling the rise of  the cashless economy as employees and consumers alike worry that the direct handling of paper currency could spread the coronavirus. (Medical and public health experts say there is currently little data to support this, and that cash is safe to use as long as people wash their hands.) But while the change means convenience and fewer virus worries for some, concerns abound for people who don’t have sufficient bank, credit or digital access. In the U.K., the consumer watchdog group Which? reported that 1 in 10 people were refused service at shops for trying to pay with physical money during lockdown.

Despite these concerns, shelter-at-home orders sparked an “online shopping revolution,” as Bloomberg News reported, both in the U.S. and overseas as even the most reluctant of consumers shopped remotely for essential items. Big-name companies like Lululemon and Nordstrom will fully adopt cash-free payments when they reopen, while Starbucks’ CEO recently said in a memo that it would “shift toward more cashless experiences” in anticipation of its mobile app becoming the dominant form of payment. Even U.S. casinos are pushing for digital payment options.

And while not all small and midsize businesses have gone cash-free, many are pushing card and contactless payments — as advised by the U.S. Centers of Disease Control and Prevention in their latest guidelines — or have switched entirely to online and mobile orders. A June report from Square showed that at the start of the pandemic in March, 8% of U.S. sellers were effectively cashless, meaning that at least 95% of their sales were made through credit or debit card. That figure jumped to 31% by the end of April and has since leveled off at 20% in mid-June as cities reopen. In the U.K., cashless sellers jumped from 10% to 60%, according to the Square analysis, and dropped just slightly to 57% in June.

The cashless economy may accelerate even faster in countries where pre-pandemic adoption was already high — like in Sweden, where some 80% of the population pay predominantly by card and just 1.3% of the country’s GDP is circulated in cash — and where mobile payments have been gaining traction, like in South Korea and Kenya. A fully cashless society is still far off, though, and even the most advanced countries offer cautionary tales about transitioning to one too quickly without a plan to ensure everyone, including the elderly and the poor, can participate.

In Sweden, said to be the first country to move to all-digital payments, some parking spots and public toilets (which require a small fee) only accept payments through card or a mobile app. In the capital city of Stockholm, buses don’t accept cash onboard, and the public transit operator SL announced in 2019 that its metro station would only take electronic payments. But lawmakers have recently pushed back. In a blow to major banks that have pushed to reduce cash services at their local branches, Sweden passed a law last year forcing them to keep offering cash to customers who need it. It went into effect this January.

Lawmakers are also pushing back in the the U.K., where British financial minister Rishi Sunak committed in March to including measures protecting access to physical cash in the upcoming budget after the independent Access to Cash Review warned that some 8 million Britons would struggle in a fully cashless economy. At the same time, free-of-charge ATMs are disappearing: Nearly 9,000 free ATMs closed over the last two years, according to The Guardian, Meanwhile the number of cash machines that charge a fee for withdrawal increased 40% within a year, making up a quarter of all ATMs.

In the U.S., cash use has steadily dropped in recent years, but it remains robust. Consumers still use hard currency in a quarter of all transactions and in over half of purchases under $10, according to the Federal Reserve Bank of San Francisco. The cashless push also faced significant setbacks as major cities like New York, San Francisco and Philadelphia passed legislation that banned stores from refusing legal tender, citing discrimination against low-income residents and people of color who are less likely to have a bank account.

Accounting for the unbanked

Roughly 1 in 5 American adults were unbanked or underbanked last year, according to a 2020 economic well-being report from the Federal Reserve Board. They make up a third of households earning less than $40,000, and Black and Hispanic adults are overrepresented, at 56% and 32%, respectively. But the people excluded from digital payments go beyond that, says executive director Joseph Leitmann-Santa Cruz of the Capital Area Asset Builder in Washington, D.C. “It’s any kind of segment of society that does not have an ongoing relationship with a mainstream financial system,” he says. “And that tends to be low-income consumers of color, undocumented individuals, people who are justice-involved citizens and anyone who might be facing homelessness or domestic violence.”

America’s digital divide presents yet another barrier: Some 15% of American consumers couldn’t use cashless payments in 2017 because they lacked internet access, including 13% of the fully banked and 46% of unbanked households, according to the Kansas City Federal Reserve.

As with many other things, the coronavirus has both exposed and exacerbated the lack of economic inclusion in the U.S. When shelter-in-place orders were in effect, not having a card or being able to use mobile apps to pay for goods prevented people from shopping online, putting them at risk of virus exposure at physical stores. And not having a bank means some families are still waiting for federal stimulus checks that may not come for weeks or months. Those who’ve gotten their payments in the form of a check must cash them through alternative financial services like cash-checking stores, which often charge high fees for their service.

“If you don’t have a relationship with a commercial bank or a credit union, you’re essentially giving away money to access your money,” says Sterling Johnson, manager of the economic inclusion team at the Partnership for Southern Equity. “And for low-income families in a pandemic, every dollar counts.”

At the same time, Covid-19 has also forced some immigrant-owned small businesses that typically were cash-only to start taking cards or partnering with delivery apps like Uber Eats — which require users to pay through the app and charges owners sometimes hefty fees. With both foot traffic and cash sales dwindling, many saw the only alternative as closing, possibly for good. “One of the big things we learned from Covid is that it’s really become even more clear that a lot of very small businesses struggle with the infrastructure that support it to grow,” says Nancy Johnson at the Urban League of Greater Atlanta.

For some anti-poverty advocates, the continual push toward more digital and contactless systems is unavoidable and highlights why cities need to ramp up economic inclusion efforts. That means helping low-income individuals set up free or low-cost checking accounts, and giving them better access to major financial institutions — which have been pulling branches from struggling neighborhoods — or to community and Black-owned banks that are willing to take on higher risks to support small businesses and future homebuyers. It also means improving financial literacy. Nancy Johnson points to Mayor Keisha Lance Bottoms’ newly launchedBank On Atlanta initiative, a partnership between the city, several major banks and organizations like Urban League of Greater Atlanta to provide classes and educational resources to residents and merchants.

If cities and the businesses that support the local economy race ahead toward a more cashless economy before economic inclusion has been achieved, “it creates an exclusionary barrier that’s almost the equivalent of socioeconomic segregation,” says Sterling Johnson, manager of the economic inclusion team at the Partnership for Southern Equity. “It says that these are things that exist only for people who live a certain type of lifestyle.”