Corporations pledge to create one million jobs for Black Americans

It marked a decrease from the prior week and was slightly better than economists had predicted. Even so, claims were still three-and-a-half times higher than in the same period last year. Overall, unemployment claims remain elevated well above historic norms, signaling ongoing pain in the job market during the coronavirus pandemic.
The holidays and uncertainty about the extension of benefits in the New Year may have held down claims last week, according to Nancy Vanden Houten, lead US economist at Oxford Economics.

In addition to regular jobless claims, another 308,262 workers filed for aid under the Pandemic Unemployment Assistance program, which provides benefits to people who aren’t eligible for regular state aid, such as the self-employed and gig workers.
Together, 1.1 million Americans filed initial claims for unemployment benefits, not adjusted for seasonal swings.

“While the decline in total initial claims is movement in the right direction, they have not fallen below one million since this crisis began,” said Indeed Hiring Lab economist AnnElizabeth Konkel in emailed comments.
PUA payments will be extended by the new stimulus deal that President Donald Trump signed into law on Sunday. The bill will also expand regular state benefits by $300 a week.
Meanwhile, 5.2 million workers filed continued claims, for their second week or more of regular state unemployment benefits, in the week ending December 19. On top of that, another 4.8 million people received payments under the Pandemic Emergency Unemployment Compensation program in the week of December 12, which provides benefits when workers have exhausted their state benefits.
In total, 19.6 million Americans filed for some form of ongoing jobless benefits in the week ending December 12. 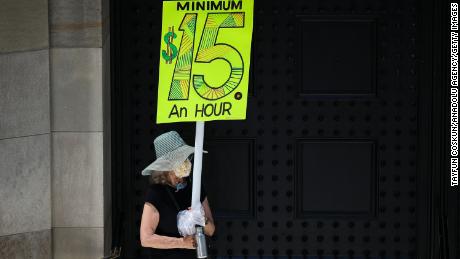 Ten months into the pandemic, millions of workers still rely on government payments to make ends meet after losing their livelihoods to the crisis. For those lucky enough to be back at work, reduced hours and wages are also a worry.

While the turn of the year and the new stimulus package may give reason to be optimistic, America’s job market still remains a long way from its pre-pandemic strength.
“While prospects for the economy later in 2021 are upbeat, the economy and labor market will have to navigate some difficult terrain between now and then, and we expect claims to remain elevated,” Vanden Houten wrote in a note to clients.
Source: Read Full Article