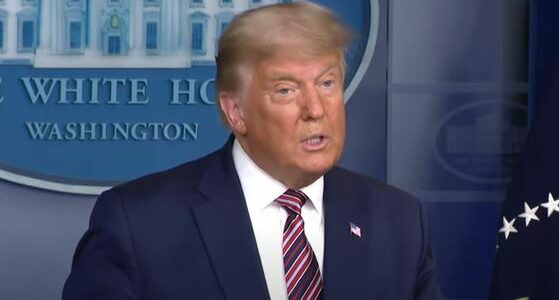 President Donald Trump is balking at the massive $2.3 trillion Covid-19 relief and government funding bills that overwhelming passed Congress and has asked lawmakers to return to amend the bill to increase “ridiculously low” direct payments of $600 per person.

Trump has yet to sign the 5,000-plus page legislation, and he spent much of a White House video statement ridiculing some of its provisions, including aid to foreign countries, along with $40 million to the Kennedy Center, “which is not even open for business.”

The bill package included $900 billion for Covid-19 relief and $1.4 trillion for the ongoing operation of the federal government. So it includes not just the Covid-19 relief, but a wide sweep of appropriations across all sectors of the government to fund ongoing, along with a host of other provisions.

Trump’s statement was posted to his Twitter feed less than 15 minutes after the White House announced a series of pardons to 15 individuals, including George Papadopoulos, who plead guilty to one count of making false statements in connection to Special Counsel Robert Mueller’s Russia investigation.

Trump did not directly threaten to veto the bill, and there is another week before government funding runs out. But his statement may stir things up as lawmakers break for the weekend holiday. The House and the Senate passed the legislation with enough votes to override a presidential veto.

“Congress found plenty of money for foreign countries, lobbyists and special interests, while send the bare minimum to the American people, who need it. It wasn’t their fault; it was China’s fault,” Trump said. He said that the direct payments should be increased to $2,000 per person, or $4,000 per couple. Trump also complained that one of the provisions he sought, allowing for the full write off of business lunches, lasted for only two years.

His opposition was a bit perplexing, given that his treasury secretary, Steven Mnuchin, was involved in the Capitol Hill negotiations.

The legislation includes a host of provisions sought by sectors of the entertainment industry, including $15 billion to aid movie theaters and live entertainment venues, as well as a series of anti-piracy measures.

Trump ended the video by saying, “I am also asking Congress to immediately get rid of the wasteful and unnecessary items in this legislation and to send me a suitable bill, or else the next administration will have to deliver a Covid relief package, and maybe that administration will be me and we will get it done.”