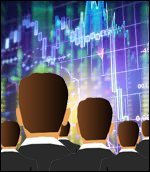 European stocks fell on Friday to extend losses from the previous session as uncertainty surrounding Brexit and U.S. trade policy dented the outlook for global growth.

The pan-European Stoxx Europe 600 index was down 0.60 percent at 383.03 in late opening deals after declining 0.3 percent in the previous session.

The German DAX and France’s CAC 40 index fell over 1 percent while the U.K.’s FTSE 100 was losing half a percent.

In economic releases, Eurozone inflation eased to 2 percent in August from a more than five-year high of 2.1 percent in July, flash data from Eurostat revealed. The European Central Bank targets “below, but close to 2 percent” inflation.

Another report showed that the Eurozone jobless rate stood at 8.2 percent in July, the same rate as seen in June, and in line with expectations, but down from 9.1 percent in July 2017. This was the lowest rate recorded in the euro area since November 2008.

A measure reflecting the current economic situation in euro area decreased in August after rising in the previous month, results of a survey by the Bank of Italy and the Centre for Economic Policy Research showed.