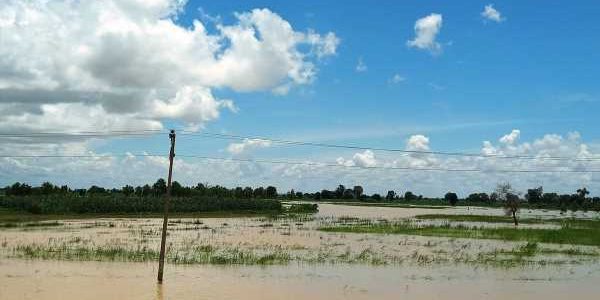 Floods Washed Away More Than 25% of Nigeria’s Rice Harvest

Floods washed away at least two million tons of rice in Nigeria, the second-largest importer of the grain. That is more than 25% of the previously projected national output of 8 million tons, according to estimates by a farmers’ organization.

At least 450,000 hectares (1.2 million acres) were destroyed in Kebbi, the country’s main rice-growing state, according to Mohammed Sahabi, the state chairman of the Rice Farmers Association of Nigeria. Planters had targeted a 2.5 million ton contribution to the national basket, but will now meet less than 20% of the target. Farmers in five other states — Kano, Nigeria, Enugu, Jigawa and Nasarawa — also reported damage.

“Although we heard the forecast of flooding this year, we didn’t expect that the damage will be of this magnitude,” Sahabi said by phone from the northwestern city of Birnin Kebbi. “Our target at state level was 2.5 million tons this year, but now we are looking at only 500,000 tons of harvest.”

Nearly 50 people died in Nigerian floods this year as torrential rains caused Africa’s most populous country’s two main rivers to overflow, according to the National Emergency Management Agency (NEMA). The agency had warned that at least 28 of 36 states of West African nation were at risk of flooding due to heavy rainfall. Other crops such as sorghum, millet and corn were also affected.

“There is this trepidation that we might have food problems on flooding and existing insecurity challenges,” Kabir Ibrahim, head of the All Farmers Association of Nigeria said by phone from Abuja, the nation’s capital. “It will be too soon to know how devastating the impact is.”

Nigeria’s rice production was about 6.7 million tons in the last three years, with imports seen declining by 200,000 tons in 2020 from 1.2 million tons last year as price-sensitive consumers switch to local staples, according to the U.S. Department of Agriculture.