President Joe Biden extended the pause on student loan payments through September 30, and while the inclusion of the 0% interest rate on those payments provided financial relief, it didn’t add up to much for the average individual.

A report released on April 5 by Upgraded Points — a travel research group — found that since student-loan payments were originally paused under the CARES Act in March, the average interest saved per borrower was $2,001, and the national average for principal paused per borrower was $34,971. The state that saved the most interest overall was California at over $8 billion (10% of the national total), with New York slightly behind at $5.2 billion in interest saved.

The report noted that while national averages and total state savings were high, “on an individual borrower level, average borrowers only saved a couple thousand dollars in interest over the 12 months. While those couple thousand dollars could have been imperative in keeping borrowers in the black during pandemic-related hardships, these borrowers are still far from climbing out of the holes they dug in college. “

When the report analyzed the states that saved the most interest per 100,000 people, DC, Georgia, and Maryland were the top three locales, which results from a combination of small populations and high savings. On the other hand, the top three states with the lowest savings per 100,000 people were Wyoming, Utah, and Alaska because although those states have smaller populations, they also generally have lower principal debts and therefore fewer interest savings.

Here are the other main findings of the report: 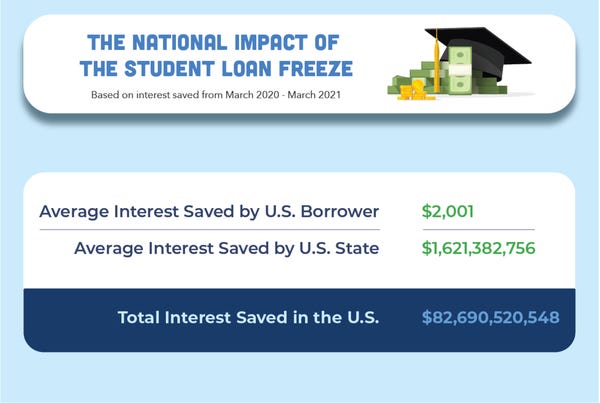 While the payment pause and interest freeze have been instrumental in helping borrowers financially during the pandemic, the student debt crisis still looms far beyond the pandemic, with 45 million Americans holding $1.7 trillion in student debt.

Biden has already acted on the crisis by canceling debt for borrowers defrauded by for-profit schools and borrowers with disabilities, but lawmakers and advocacy organizations continue to call for the president to cancel $50,000 in student debt per borrower to lift the debt burden.

Sen. Elizabeth Warren of Massachusetts is one of the leading lawmakers calling for student debt cancelation, and she said on Twitter on April 17 that borrowers need relief now.

“The whole student loan debt system is broken, and it’s placing a massive burden on tens of millions of people,” Warren said. “They need immediate relief. And we need big, structural change to make higher education within reach for every family.”