New York (CNN Business)The highly anticipated arrival of boozy Mountain Dew is finally here, but not everyone will be able to get it at first.

HARD MTN DEW is launching Tuesday at select retailers in Tennessee, Florida and Iowa. Availability of the sugar-free, spiked seltzer will expand to more states later this year and fans can track that on social media.
Boston Beer Company is partnering with PepsiCo (PEP) to turn the soft drink into a caffeine-free alcoholic beverage, which comes in four flavors, including Baja Blast, watermelon and black cherry and original. HARD MTN DEW will be sold in 24-ounce single-serve cans and a variety pack consisting of a dozen 12-ounce cans. 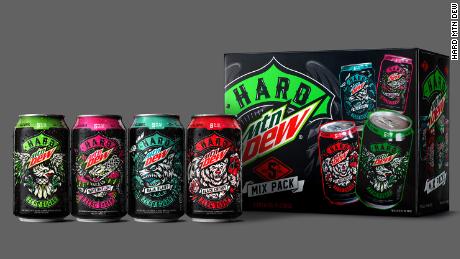 Federal laws prevent it from a single nationwide launch as the new entity created by Boston Beer and Pepsi to distribute the drink, called Blue Cloud Distribution, Inc. is working to secure alcohol distribution permits in each US state. Prices of the drink also vary depending on state.

The 100-calorie spiked seltzer is 5% alcohol by volume and will be “marketed to adults of legal age and merchandized consistently with other alcohol beverages.”

Eager fans of legal drinking age that can’t wait for it to expand to their state can enter a contest to win a trip to Nashville, Tennessee, the birthplace of the soft drink, where they can try the spiked seltzer.

Boston Beer (SAM)also makes Truly Hard Seltzer, which was once a bright spot for the company. However, the company admitted in last week’s earnings that growth in the hard seltzer category “fell well short of our and the industry’s expectations” and dampened the company’s overall performance. Shares are down 63% over the past year.
Still, partnering with an established brand in a beverage category that’s still growing (albeit not as quickly) could help Boston Beer. Flavored malt beverages sales grew 5.5% in 2021 to more than $3.1 billion, according to data from IRI, a Chicago-based market research firm.
Source: Read Full Article