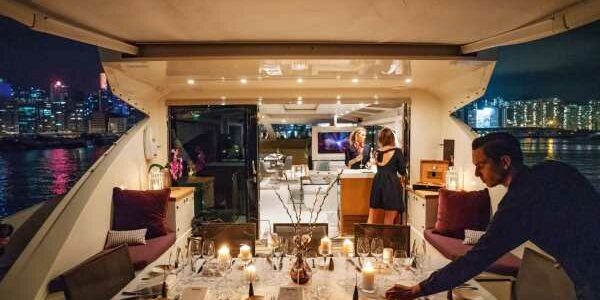 Hong Kong has set up a hotline for residents to report parties aboard private yachts and rented party boats, as the financial hub tightens social-distancing rules to contain a surge of virus cases.

With nightclubs and karaoke parlors closing as a result of a new round of restrictions, some people were hosting rule-breaking gatherings at sea, Chief Executive Carrie Lam told a weekly news briefing Tuesday ahead of a meeting of her advisory Executive Council. Holding parties aboard rented “junks” in Hong Kong’s iconic harbor and outlying islands is a favorite weekend pastime, as is gathering on private yachts anchored off tropical beaches.

“The reporting hotline newly set up is there because we see that, after party rooms and karaoke parlors have been made to close, there are a number of people who organize events at sea,” Lam said. “We want to target such a breach.”

The local police force, which has already launched ahotline for potential breaches of the city’s controversial national security law, has alsoposted on Facebook calling on residents to alert them to parties at sea.

“Whilst scheduled premises such as bars, bath houses and party rooms have been closed according to the law, the police noticed that a number of vessels have been hired for social gathering,” the police said. “Even privately owned yachts are sometimes used for such purpose. This greatly increased the risk of transmission of disease.”

Lam’s comments come a day after announcing a new round ofrestrictions, including sending civil servants back to working from home, reducing restaurant-goers to two people per table and closing karaoke bars and mahjong parlors. She said authorities planned to raise the HK$2,000 ($258) fine for violating a ban on group gatherings because the current penalty wasn’t enough of a deterrent.

The latest round of measures, including the suspension of a planned travel corridor with Singapore, have dented hopes for an economic recovery in the Asian financial hub. While Hong Kong has had more success containing the pandemic than many big cities — with just over 6,300 total cases and 109 deaths since the outbreak began — cases are rising again with more than 70 cases daily over the past seven days.