The Will County Sheriff’s Office said in a news release late Friday that an attorney for Dr. Ulrich Klopfer’s family contacted the coroner’s office Thursday about possible fetal remains being found at the home in an unincorporated part of Will County in northeastern Illinois.

The sheriff’s office said authorities found 2,246 preserved fetal remains but there’s no evidence medical procedures were performed at the home.

The coroner’s office took possession of the remains. An investigation is underway.

A message left Saturday seeking additional comment on the discovery was not returned by the Will County Sheriff’s Office investigations department.

Klopfer, who died Sept. 3, was a longtime doctor at an abortion clinic in South Bend, Indiana. It closed after the state revoked the clinic’s license in 2015. The Indiana State Department of Health had previously issued complaints against the clinic, accusing it of lacking a registry of patients, policies regarding medical abortion, and a governing body to determine policies.

The state agency also accused the clinic of failing to document that patients get state-mandated education at least 18 hours before an abortion.

Klopfer was believed to be Indiana’s most prolific abortion doctor, with thousands of procedures performed in multiple Indiana counties over several decades,the South Bend Tribune reported.

Mike Fichter, the president of Indiana Right to Life, said in a statement sent Friday night that “we are horrified” by the discovery of the fetal remains at Klopfer’s Illinois residence. He called for Indiana authorities to help determine whether those remains have any connection to abortion operations in Indiana. 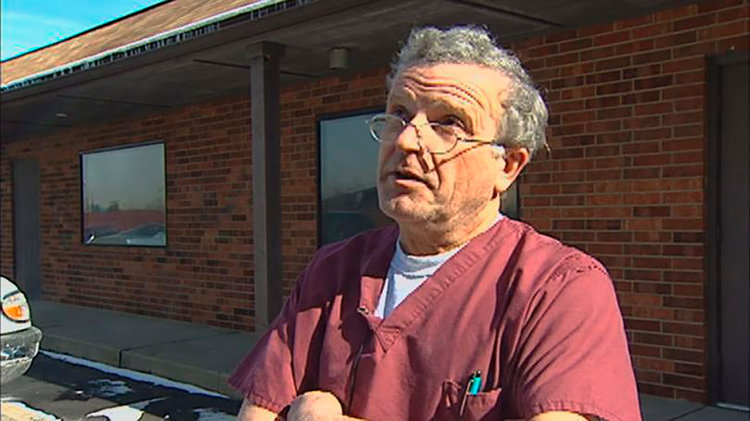 This image made from a Dec. 1, 2015, video provided by WNDU-TV shows Ulrich Klopfer in South Bend, Ind. More than 2,200 medically preserved fetal remains have been found at the Illinois home of the former Indiana abortion clinic doctor who died last week.WNDU-TV via Associated Press

“These sickening reports underscore why the abortion industry must be held to the highest scrutiny,” Fichter said in the statement.

A message left Saturday by The Associated Press for a spokesman for Gov. Eric Holcomb asking if Indiana officials would investigate was not immediately returned.

Klopfer’s license wassuspended by Indiana’s Medical Licensing Board in November 2016 after the panel found a number of violations, including a failure to ensure that qualified staff was present when patients received or recovered from medications given before and during abortion procedures.

Klopfer was no longer practicing by that time, but he told the panel he had never lost a patient in 43 years of doing abortions and that he hoped to eventually re-open his clinics.

In June 2014, Klopfer was charged in St. Joseph County, Indiana, with a misdemeanor for failure to file a timely public report. He was accused of waiting months to report an abortion he provided to a 13-year-old girl in South Bend. That charge was later dropped after Klopfer completed a pre-trial diversion program.

Read more:Planned Parenthood forfeited $60 million in federal funding so they don’t have to comply with a rule that bans abortions

Republican US Rep. Jackie Walorski, R-Indiana, called the discovery of the fetal remains “sickening beyond words” in a statement released by her office.

“He was responsible for thousands of abortions in Indiana, and his careless treatment of human remains is an outrage,” she said in her statement.

In May,the US Supreme Court upheld an Indiana law requiring the burial or cremation of fetal remains following abortions in the state. That law was signed by Vice President Mike Pence in 2016 when he was Indiana’s governor, but it was the subject of legal challenges.

The Indiana State Department of Health, which oversees abortion clinic regulation, has integrated that law’s provisions into the agency’s existing licensing process.

Prior to the ruling, Indiana clinics could turn over fetal remains to processors who handle the disposal of human tissues or other medical material by incineration.

All 737 Max 8 planes in India grounded; SpiceJet to cancel around 35 flights Thursday