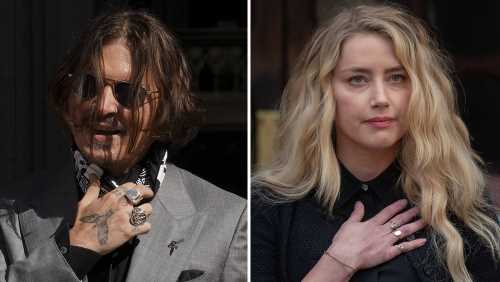 Amber Heard really isn’t buying Johnny Depp’s line that he is too busy making Fantastic Beasts 3 to show up for the start of the $50 million defamation trial that he instigated.

“Plaintiff should not be permitted to delay the trial and continue causing this damage simply because there is a scheduled movie shoot conflicting with trial and for which he has made no effort to schedule around his deposition and this trial,” the Aquaman star’s lawyers wrote in an opposition filing (read it here) made in Virginia court last week. “This case needs to end, and end soon,” Heard’s Old Dominion attorneys add of the big swing Depp first made against his ex-wife in spring 2019.

“Ms. Heard is not a victim of domestic abuse, she is a perpetrator,” the complaint from Depp asserted in reaction to an op-end Heard wrote about domestic violence for the Washington Post in December 2018 – a supposedly career injuring op-ed that never actually mentioned Depp by name.

Heard filed her own $100 million countersuit earlier this summer against Depp’s “campaign of terror,” as the most recent filing calls it.

In a trial that has already been pushed back twice due to the coronavirus pandemic, Depp on August 31 asked that the proceedings, which were supposed to start in mid-January, to instead kick off somewhere between March and June of next year. Depp said the revamped production of the David Yates-directed Fantastic Beasts 3, which is now up and running in the UK, with Depp set to go before the cameras from October to next February.

As things stand now, Depp is penciled in to to sit for a deposition in the case October 5, though that looks almost certain to change.

In her opposition filed this weekend, Heard proclaims that if Fairfax (VA) County Chief Judge Bruce White grants Depp’s request for continuance it could actually conflict with the filming schedule on her own Warner Bros sequel.

“Defendant’s career has virtually halted, with the exception of Aguaman II – which she was told months ago would begin filming in February 2021,” the short(ish) September 4 filing from Heard’s legal team at Reston VA’s Charlson Brederoft Cohen & Brown, P.C. and Roanoke, VA’s Woods Rogers PLC. “Warner Bros counsel said that they do not know when Aguaman II will begin filming, but it will be sometime in the spring of 2021, which is also a basis for denying the continuance.”

Essentially, after declaring that Depp dropped his demand last week for a continuance at the last minute, Heard is bluntly telling the court she might need to make the same move down the line herself. Which is another way of saying let’s do this in January to avoid “establishing a slippery slope precedent.”

Warner Bros declined comment on the matter when contacted by Deadline today. Reps for Depp did not respond to request for comment on Heard’s opposition. A hearing on the continuance request and response is set for September 11 in Fairfax County, VA.

A media spectacle from day one, the Rum Diary co-stars’ relatively short marriage came to an end in 2016 with a temporary restraining order slapped against Depp amid domestic violence claims. Their relationship ended in a $7 million divorce settlement, most of which Heard ultimately donated to charity.

These latest stateside moves in the fierce Virginia case come as the former couple and their teams of lawyers await the potentially pivotal verdict in Depp’s UK libel battle against Rupert Murdoch-owned The Sun. Billed as the biggest English libel trial of the 21st century, the 16-day legal trial against the tabloid over stories about “wife beater” Depp allegedly abusing Heard ended in late July.

The High Court’s Judge Justice Nicol is expected to make public his verdict later this month or perhaps even later in the fall – when Depp will be back in the UK for Fantastic Beasts 3.