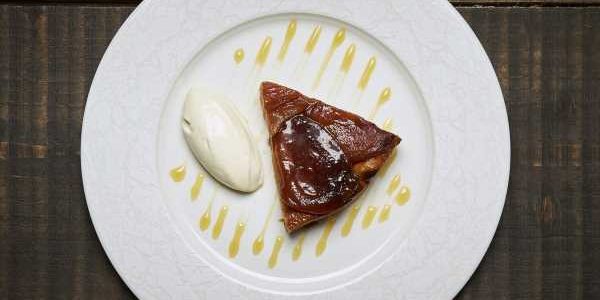 Chris and Jeff Galvin are known for their love of French cooking, from bistro classics to modern gastronomy, and tarte tatin is a dish that almost never leaves their menus atGalvin at Windows — atop the Hilton Park Lane — and City venue Galvin La Chapelle.

The British brothers even run an annual competition in which home cooks compete to bake the best one.

“We loved it as kids when our grandmother cooked it,” says Chris of the dish — a simple tart of apples, butter and sugar — whose history can be traced to the 1880s, when it appeared on the menu of the Hotel Tatin in central France.

“That combination of the caramel, the tartness of the apples and the buttery richness of the puff pastry, it’s a marriage made in heaven,” says Chris, who fell in love with France on his first visit, when he was aged about eight.

“My dad had a big win on the horses and he bought a second-hand car and drove us around France. I was immediately hooked.”

The brothers’ recipe is much simpler than many you will see, and I still managed to mess it up a bit. Lacking a pan that would fit in my oven, I improvised with a cake tin and failed properly to caramelize the apples at the start of the cooking process. The result lacked color, though it did taste very good.

Chris says you need to be “daring” right at the start, lifting up the apples to check they are caramelizing on the stove, before moving the pan to the oven. He says you need dry varieties of apples, and even recommends peeling them and placing them in the fridge overnight to reduce moisture. He also insists on top-quality French butter. (I’d picked up the cheapest on the supermarket shelf.)

Chris recommends serving it with crème fraiche laced with Calvados.

Spread the butter over the bottom of a 20-cm oven-proof non-stick frying pan.

Sprinkle over the caster sugar then arrange the apples around standing on their sides.

Place on a moderate heat until the sugar starts to caramelize. Take off the heat and let it cool down for 10 minutes.

Prick the rolled out puff pastry with a fork and gently lay it over the top of the apples, tucking the edges down the side.

Bake in a preheated oven at 180 degrees Centigrade (350 degrees Fahrenheit) for 20 minutes before turning the oven down to 160°C. Cook for another 20 minutes.

Remove from the oven and turn out  immediately on to a chopping board or a plate. Cut into four.

Richard Vines is Chief Food Critic at Bloomberg. Follow him on Twitter@richardvines and Instagram@richard.vines.