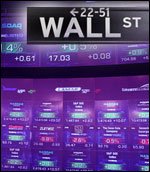 After initially showing a lack of direction, stocks continue to turn in a relatively lackluster performance in mid-day trading on Friday. Despite the choppy trading, the Nasdaq reached a new record high and the S&P 500 reached its best intraday level in over five months.

The choppy trading on Wall Street comes as traders seem reluctant to make significant moves on the heels of the considerable volatility seen over the past few sessions.

JPMorgan Chase is nearly flat despite reporting second quarter results that exceeded expectations on both the top and bottom lines.

Meanwhile, shares of Wells Fargo have shown a significant move to the downside after the bank reported second quarter earnings and revenues that came in below analyst estimates.

Citigroup has also come under pressure after reporting better than expected second quarter earnings but on revenues that came in below expectations.

The Fed described economic growth in the first half of the year as solid and reiterated it expects further gradual increases in interest rates.

“The Federal Reserve remains positive on the U.S. economic outlook with barely any mention of the trade or yield curve worries that are preoccupying markets,” said James Knightley, Chief International Economist at ING.

Meanwhile, the University of Michigan released a report showing an unexpected decrease in consumer sentiment in the month of July due to concerns about potential impact of tariffs.

The preliminary report said the consumer sentiment index dipped to 97.1 in July from the final June reading of 98.2. Economists had expected the index to come in unchanged.

A separate report released by the Labor Department showed an unexpected decrease in import prices in the month of June but a slightly bigger than expected increase in export prices.

The Labor Department said import prices fell by 0.4 percent in June after climbing by an upwardly revised 0.9 percent in May.

The pullback surprised economists, who had expected import prices to inch up by 0.1 percent compared to the 0.6 percent increase originally reported for the previous month.

Most of the major sectors continue to show only modest moves on the day, contributing to the relatively lackluster performance by the broader markets.

Natural gas stocks have shown a strong move to the upside, however, with the NYSE Arca Natural Gas Index up by 1.2 percent.

The strength among natural gas stocks comes despite a decrease by the price of the commodity, as natural gas for August delivery is falling $0.029 to $2.768 per million BTUs.

On the other hand, the notable losses being posted by Citigroup and Wells Fargo continue to weigh on the banking sector.

The major European markets also moved to the upside on the day. While the U.K.’s FTSE 100 Index inched up by 0.1 percent, the German DAX Index and the French CAC 40 Index both rose by 0.4 percent.

In the bond market, treasuries have moved moderately higher over the course of the session. As a result, the yield on the benchmark ten-year note, which moves opposite of its price, is down by 2.2 basis points at 2.831 percent.