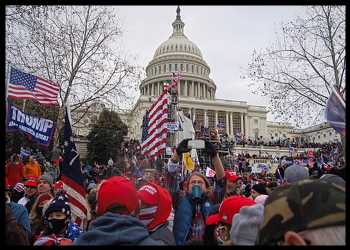 The vital data include appointment information for individuals allowed to enter the White House complex on January 6, the day the U.S. legislature was attacked by pro-Trump mob.

In a letter sent to the National Archives, White House counsel Dana Remus said, “The President has determined that an assertion of executive privilege is not in the best interests of the United States, and therefore is not justified, as to these records and portions of records.”

“The Obama administration followed the same practice. The majority of the entries over which the former President has asserted executive privilege would be publicly released under current policy,” Remus explained.

Responding to Remus’ letter, the National Archives wrote to Trump on Wednesday that the documents would be delivered to the House Select Committee on March 3.

Addressing a rally on January 6, 2021, Trump demanded that the presidential election be overturned, and called on his supporters to march to the Capitol building where lawmakers convened to certify the election results.

As a joint session of Congress was in progress to certify the election victory of Joe Biden, dozens of Trump-supporters stormed the Capitol and disrupted the proceedings. Five people, including one woman shot by police, died in the rampage, allegedly instigated by Trump.

The nine-member House select committee, which is dominated by Democrat lawmakers, is seeking more than 700 pages of disputed documents as part of its attempt to assert if Trump had prior knowledge about the riot.

The billionaire-turned politician insists that Biden fraudulently won the presidential election, and refuses to acknowledge losing it.