Home » Business » Natural gas is one of the few trades that hasn't worked on Wall Street, down 50% in 12 months

Natural gas is one of the few trades that hasn't worked on Wall Street, down 50% in 12 months

Pretty much every trade has worked on Wall Street this year except one: natural gas.

Futures prices fell to a one-month low on Friday after plunging more than 12% for the week. The commodity is currently trading around $2.34 per million British thermal units, which is nearly 50% below where it traded a year earlier. It's down 21% for 2019.

Excess supply is pressuring prices. Inventory built up last spring following a warmer-than-expected winter, and U.S. production has climbed to a record high, according to data from the U.S. Energy Information Administration.

A milder fall season is also having an impact on prices. According to Credit Suisse, temperatures since September have been 4% warmer than they were last year, although they are 20% below the 5-year average.

Bespoke Weather chief meteorologist Brian Lovern said that since the middle of the summer the weather has been bullish, but that the excess supply is what's keeping prices lower. Going forward he said to expect volatility as different weather patterns play out, all of which could have a drastically different impact on prices.

"From here, we feel that we will have a lot of volatility in the weather pattern, with some warming seen as we move into December (a big reason prices fell so much this week), but there will be more cold threats either late in December, or into the middle portion of winter," he said to CNBC.

Lovern said that a "normal" winter could see prices decline to the $2.25 level while a colder-than-expected winter could "still save the market." An uptick in demand for heat could chip away at inventory levels, in which case Lovern said prices could reach $2.75.

On the flip side, he said a rise in temperatures would be "disastrous" and could send prices well under $2.00.

While he said that the latter two scenarios are extreme and that he favors the middle of the road prediction, given the current excess supply temperatures will need to be colder than usual in order to avoid a potential glut next year.

With winter approaching, colder temperatures have started to eat away at inventories. For the week ending Nov. 22 stockpiles decreased by 28 billion cubic feet — the second straight week of declines — bringing total inventory to 3.61 trillion cubic feet. The last two weeks mark a turning point, before which inventories had been steadily increasing since the middle of March. 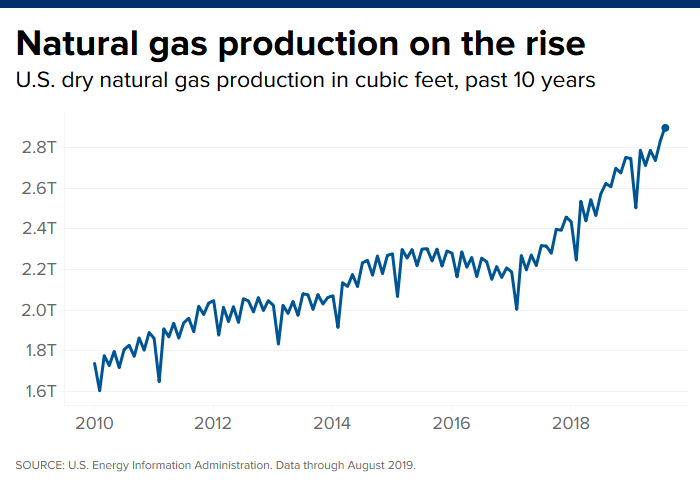 Despite warmer fall temperatures Credit Suisse noted that it's still early in the season and 84% of heating days are still to come.

But the Street continues to be bearish. For the week ending Nov. 12 bearish contracts outweighed bullish contracts by nearly 90,000, The Wall Street Journal said, using data from the Commodity Futures Trading Commission. This is part of an ongoing trend, which has seen traders placing net bearish bets since last spring.

But MKM Financial's Jeff Kilburg said that the short-term selling may be about to take a breather.

"With exceptional volatility this fall and the recent large speculative short positions really pushing prices lower, this recent dip in prices may have run its course," he said to CNBC. "I believe you have to respect the range and view the recent selling action as a Black Friday sale for Nat Gas," he added.

For 2020, analysts are calling for an average natural gas price of $2.75, according to estimates from Reuters.

Recent market "jolt" will be first of many as easy money era ends, says BIS