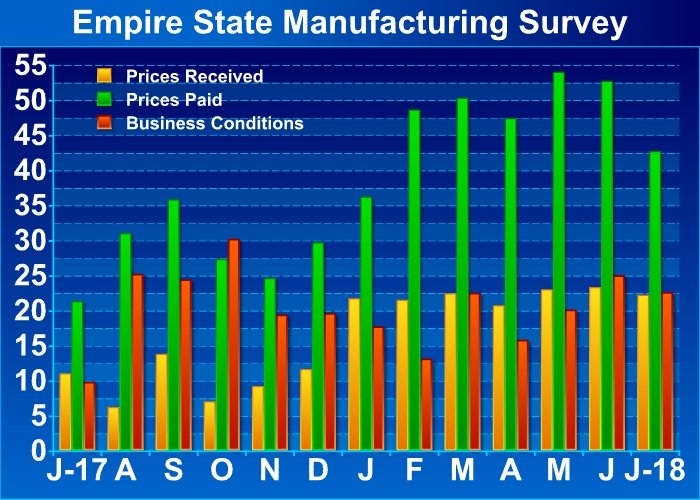 A report released by the Federal Reserve Bank of New York on Monday showed New York manufacturing activity continued to grow at a fairly brisk pace in July, although the pace of growth slowed from the previous month.

While the New York Fed said its general business conditions index dipped to 22.6 in July from 25.0 in June, a positive reading still indicates growth in regional manufacturing activity. Economists had expected the index to drop to 22.0.

The decrease by the headline index came as the shipments index slumped to 14.6 in July from 23.5 in June and the new orders index dropped to 18.2 from 21.3.

The report said the number of employees index also edged down to 17.2 in July from 19.0 in June, indicating a modest slowdown in the pace of job growth.

The New York Fed also said firms were slightly less optimistic about the six-month outlook than they were last month.

The index for future business conditions fell to 31.1 in July from 38.9 in June, essentially reversing the previous month’s gain.

On Thursday, the Philadelphia Federal Reserve is scheduled to release its report on regional manufacturing activity in the month of July. The Philly Fed Index is expected to rise to 22.0 in July from 19.9 in June.