Ohio is the latest state to pass a ‘heartbeat’ abortion bill. Could the legal challenges eventually overturn Roe v. Wade? 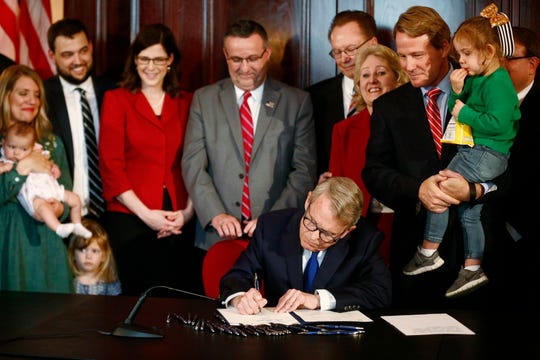 With the stroke of a pen by Gov. Mike DeWine, Ohio became the third state this year to pass a “heartbeat” bill banning abortion as early as six weeks into a pregnancy.

The ban takes effect after the detection of a fetal heartbeat at a point before many women are even aware they are pregnant.

Kentucky and Mississippi have adopted similar laws, while a Georgia bill awaits only the expected signature by Gov. Brian Kemp by May 12. The Mississippi law takes effect in July.

Meanwhile, “heartbeat” bills have passed one chamber of the legislature in Missouri, Ohio and Tennessee and have been introduced in Florida, Illinois, Louisiana, Maryland, Minnesota, New York, South Carolina and West Virginia.

The bills hit at the nexus of the abortion debate, and frame the act in stark, emotional terms, with proponents arguing that preserving life outweighs arguments against government interference in personal, medical decisions.

The governor of Georgia is set to sign one of the most restrictive abortion laws in the country, the "fetal heartbeat" bill. Dozens of celebrities have signed a letter against the passing of the bill.
USA TODAY

“The heartbeat is the first sign of life and it is the last thing you will hear when a person dies,” said Rep. Chris Fugate, an Eastern Kentucky Republican who introduced the Kentucky bill on the House floor.

But the “heartbeat” laws have also run into legal roadblocks. Kentucky’s bill has been stymied by a federal court order blocking enforcement and the first-in-the-nation bill passed by North Dakota in 2013 was ruled unconstitutional, as was one passed last year in Iowa.

To many anti-abortion voices, legal challenges are the point.

“The heartbeat bill is the next incremental step in our strategy to overturn Roe v. Wade,” Ohio Right to Life President Mike Gonidakis told the Associated Press, referring to the landmark 1973 Supreme Court ruling that legalized abortion up until viability.

“While other states embrace radical legislation to legalize abortion on demand through the ninth month of pregnancy, Ohio has drawn a line and continues to advance protections for unborn babies,” he said.

Likewise, pro-abortion forces see the courts as an avenue to create precedents to fortify their position.

Jennifer Dalven, director of the ACLU Reproductive Freedom Project, said the attempts to go after Roe have been going on for a decade, but now the opponents “are out in the open as to their goal.”

Meanwhile, she says, states are also passing other laws, such as narrowly restricting clinic options for women, that are  “quietly pushing abortion out of the reach for thousands of women.”

Dalven also notes that the Supreme Court already has a number of abortion-related cases it could take up immediately it if wanted to and does not have to wait for a “heartbeat” abortion challenge to work its way up the appeals track.

Divide over abortion in America

The “heartbeat” bills, while among the most stringent anti-abortion measures short of a ban, are only one front in the long-running debate over abortion.

The Guttmacher Instititute, a nonprofit group on sexual and reproductive health issues, says legislation is under consideration in 28 states to ban abortion in a variety of ways.

These include “trigger bans” that would automatically make abortion illegal if Roe is overturned, “method bans” that would bar providers from performing a specific type of abortion; “reason bans” that would prohibit abortion based on fetal characteristics, such as sex, race or disability status; and “gestational age bans,” prohibiting an abortion at a specific point in pregnancy, such as six, 18 or 20 weeks after the last menstrual period.

The law, which includes the non-medical term “human dismemberment abortion,” makes it a crime for doctors to use instruments such as clamps, scissors and forceps to remove the fetus from the womb during the second trimester.

Women getting the procedure would not be charged, but doctors performing it would face a felony, punishable by up to five years in prison and a $10,000 fine. An exception exists for medical emergencies.

On the other side, 13 states have introduced legislation that would establish legal protections for abortion or repeal what they view as outdated abortion laws.

In January, New York adopted the “Reproductive Health Act” that affirms the right to abortion until the fetus is viable and when the patient’s life or health is at risk.

It joins nine other states in establishing legal protections for abortion. Similar bills has passed the first legislative chamber in New Mexico, Rhode Island and Vermont, according to the Guttmacher Institute.

Google Plus shutting down after security glitch exposes up to 500,000 users’ data

Fight over abortion comes to Oregon as Republicans target reproductive rights in U.S.