Qantas Airways has snapped up a 20 per cent stake in charter flight operator Alliance Aviation Services and intends to become its majority owner if the competition watchdog lets it.

The airline said on Friday it bought the shares for an average price of $2.40 each, valuing its investment at about $60 million. 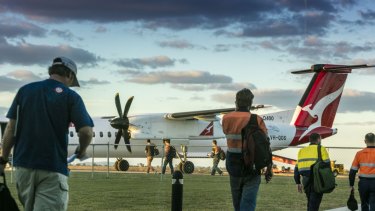 Qantas sees the opportunity to merge Alliance with its own fly-in, fly-out operations. Credit:Glenn Hunt

Alliance mostly operates charter flights for the fly-in, fly-out resources sector, predominantly in Western Australia and Queensland, and Qantas sees the potential to merge it with its own charter and regional services.

"Alliance is a profitable, well-managed business with high levels of operational maturity," Qantas said in a statement.

"It is also a long-term provider to the Qantas Group and flies regional services on behalf of the national carrier."

Qantas said it would seek regulatory approval from the Australian Competition and Consumer Commission to build on its investment to eventually take a majority position.

"In the meantime, Qantas is supportive of the ‘business as usual’ approach of Alliance Airlines' management and is not seeking board representation," Qantas said.

Alliance's shares, which were last trading at $2.45, were suspended on Friday pending the announcement. Alliance said its board had not received any approach from Qantas at this stage.