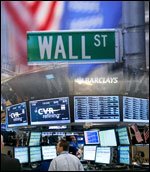 After trending higher over the past several sessions, stocks gave back some ground during trading on Wednesday amid renewed trade concerns. With the drop on the day, the S&P 500 pulled back off its best closing level in five months.

The weakness on Wall Street came amid renewed concerns about the economic impact of a global trade war after President Donald Trump’s administration proposed new tariffs on China.

Trump has ordered U.S. Trade Representative Robert Lighthizer to begin the process of imposing tariffs of 10 percent on an additional $200 billion of Chinese imports.

“For over a year, the Trump Administration has patiently urged China to stop its unfair practices, open its market, and engage in true market competition,” Lighthizer said. “We have been very clear and detailed regarding the specific changes China should undertake.”

“Unfortunately, China has not changed its behavior – behavior that puts the future of the U.S. economy at risk,” he added. “Rather than address our legitimate concerns, China has begun to retaliate against U.S. products. There is no justification for such action.”

China has vowed to take countermeasures in response to the new tariffs, which will not effect until after a two-month review process.

In U.S. economic news, the Labor Department released a report showing producer prices increased by slightly more than expected in the month of June.

The Labor Department said its producer price index for final demand rose by 0.3 percent in June after climbing by 0.5 percent in May. Economists had expected prices to edge up by 0.2 percent.

Excluding food and energy prices, core producer prices also climbed by 0.3 percent in June, matching the increase seen in May. Core prices had been expected to rise by 0.2 percent.

Compared to the same month a year ago, producer prices were up by 3.4 percent in June, representing the largest 12-month increase since a 3.7 percent jump in November of 2011.

Gold stocks moved sharply lower over the course of the session, dragging the NYSE Arca Gold Bugs Index down by 2.9 percent.

The weakness among gold stocks came amid a notable decrease by the price of the precious metal, with gold for August delivery slumping $11 to $1,244.40 an ounce.

Substantial weakness was also visible among steel stocks, as reflected by the 2.8 percent drop by the NYSE Arca Steel Index. The index pulled back after closing higher for four straight sessions.

Energy stocks also came under pressure on the day, moving lower along with the price of crude oil. Crude for August delivery plunged $3.73 to $70.38 a barrel amid concerns about an increase in supply.

Semiconductor, telecom and computer hardware stocks also saw considerable weakness, moving lower along with most of the other major sectors.

The major European markets also showed significant moves to the downside on the day. While the U.K.’s FTSE 100 Index tumbled by 1.3 percent, the German DAX Index and the French CAC 40 Index both plummeted by 1.5 percent.

In the bond market, treasuries moved notably higher amid the renewed trade war concerns. Subsequently, the yield on the benchmark ten-year note, which moves opposite of its price, fell by 3.1 basis points to 2.842 percent.

Reports on consumer prices and weekly jobless claims may attract attention on Thursday, although traders are also likely to keep an eye on any developments regarding trade.