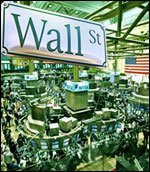 After coming under pressure early in the session, stocks showed a significant turnaround over the course of the trading day on Monday. The major averages climbed well off their lows of the session and into positive territory.

The rebound on Wall Street came following the release of a report from the Institute for Supply management showing growth in U.S. manufacturing activity unexpectedly accelerated in the month of June.

The ISM said its purchasing managers index climbed to 60.2 in June after rising to 58.7 in May, with a reading above 50 indicating growth in manufacturing activity. Economists had expected the index to edge down to 58.4.

“The increase in the ISM manufacturing index in June is a clear sign that, for now at least, the strength of the domestic economy is more than offsetting any increased uncertainty on trade policy,” said Michael Pearce, Senior U.S. Economist at Capital Economics.

He added, “However, with the dollar appreciating by 6% since April, global growth slowing and retaliatory tariffs just beginning to bite, the sector looks unlikely to fare so well for long.”

The bill, known as the United States Fair and Reciprocal Tariff Act, essentially provides Trump a license to raise U.S. tariffs at will, without congressional consent, Axios said.

“It would be the equivalent of walking away from the WTO and our commitments there without us actually notifying our withdrawal,” a source familiar with the bill told Axios.

Nonetheless, the source noted Congress would never give the president the authority, and a White House spokeswoman told Axios the administration does not have actual legislation it is preparing to rollout.

A previous report from Axios said Trump has repeatedly told top White House officials he wants to withdraw the United States from the World Trade Organization.

Additionally, the European Commission has warned the Trump administration that imposing tariffs on cars imported from Europe will harm trade, growth and jobs in the U.S. and abroad.

Overall trading activity was somewhat subdued, however, with the upcoming July 4th holiday keeping some traders on the sidelines.

Later this week, trading may be impacted by reaction to the Labor Department’s monthly jobs report and the minutes of the latest Federal Reserve meeting.

Computer hardware stocks showed a strong move to the upside on the day, contributing to the advance by the tech-heavy Nasdaq. Reflecting the strength in the hardware sector, the NYSE Arca Computer Hardware Index climbed 1.3 percent.

On the other hand, substantial weakness remained visible among oil service stocks, as reflected by the 3 percent slump by the Philadelphia Oil Service Index.

The drop by oil service stocks came as the price of crude oil climbed well off its worst levels of the day but still closed down $0.21 at $73.94 a barrel.

Other energy stocks also moved to the downside, with the NYSE Arca Oil Index and the NYSE Arca Natural Gas Index falling by 1.4 percent and 1.3 percent, respectively.

In overseas trading, stock markets across the Asia-Pacific region moved mostly lower during trading on Monday. Japan’s Nikkei 225 Index plunged by 2.2 percent, while China’s Shanghai Composite Index plummeted by 2.5 percent. The markets in Hong Kong were closed for a holiday.

The major European markets also moved to the downside on the day. While the U.K.’s FTSE 100 Index slumped by 1.2 percent, the French CAC 40 Index dropped by 0.9 percent and the German DAX Index fell by 0.6 percent.

In the bond market, treasuries moved modestly lower over the course of the session after seeing initial strength. As a result, the yield on the benchmark ten-year note, which moves opposite of its price, edged up by 1.7 basis points to 2.866 percent.

Trading activity is likely to remain subdued on Tuesday, as the markets are due to close earlier than normal ahead of the July 4th holiday.

The Commerce Department’s report on factory orders in the month of May could attract some attention, with orders expected to come in unchanged.