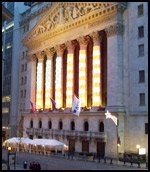 Following the pullback seen in the previous session, stocks are likely to move back to the upside in early trading on Thursday. The major index futures are currently pointing to a higher open for the markets, with the Dow futures up by 206 points.

The upward momentum on Wall Street comes amid easing trade war concerns after news of U.S. threats of a new 10 percent tariff on $200 billion worth of Chinese imports contributed to the weakness on Wednesday.

China vowed to take countermeasures in response to the new tariffs, although the markets may respond positively to the lack of the announcement of specific retaliation by the Chinese.

Traders also seem optimistic the continued tariff threats will eventually bring the U.S. and China to the table for talks that could result in a long-term trade agreement.

On the U.S. economic front, the Labor Department released a report showing consumer prices edged slightly higher in the month of June.

While consumer prices showed only a modest monthly increase, the annual rate of growth still accelerated to a more than six-year high of 2.9 percent in June from 2.8 percent in May.

Core consumer price growth also edged up to 2.3 percent in June from 2.2 percent in May, reaching its highest level since January of 2017.

A separate report from the Labor Department showed first-time claims for unemployment benefits fell by more than expected in the week ended July 7th.

After trending higher over the past several sessions, stocks gave back some ground during trading on Wednesday amid renewed trade concerns. With the drop on the day, the S&P 500 pulled back off its best closing level in five months.

The major European markets have also moved back to the upside on the day. While the German DAX Index has climbed by 0.5 percent, the U.K.’s FTSE 100 Index and the French CAC 40 Index are both up by 0.9 percent.

On the currency front, the U.S. dollar is trading at 112.48 yen compared to the 112.01 yen it fetched at the close of New York trading on Wednesday. Against the euro, the dollar is unchanged compared to yesterday’s $1.1674.