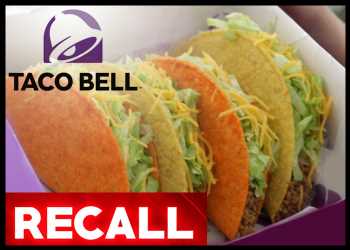 The U.S. Department of Agriculture’s Food Safety and Inspection Service or FSIS announced that the recall by beef producer Kenosha Beef International involves an undetermined amount of seasoned beef products.

The USDA said it took action after receiving three customer complaints, but there were no confirmed reports of adverse reactions due to consumption of these products.

Meanwhile, Taco Bell in their statement said approximately 2.3 million pounds of seasoned beef have been recalled from its restaurants and distribution centers.

According to the company, the impacted products were produced at one plant location on only one of the two lines used to make seasoned beef.

The affected seasoned beef items were produced by Kenosha Beef on various dates from September 20, 2019 to October 4, 2019. The product was sent to distribution centers in six states including Michigan, New Jersey, New York, Ohio, and Virginia.

Taco bell noted that as of October 14, all affected restaurants in 21 states across the eastern Midwest, northern Southeast and Northeast regions have removed and discarded the recalled products.

The issue was discovered when a customer reported they found a metal shaving in their menu item, following which the supply chain was shut down, products were removed, and the USDA was notified.

In March, Tip Top Poultry had recalled about 100 pounds of frozen, fully cooked diced white chicken meat products due to presence of soy, a known allergen, which was not declared on the product label.