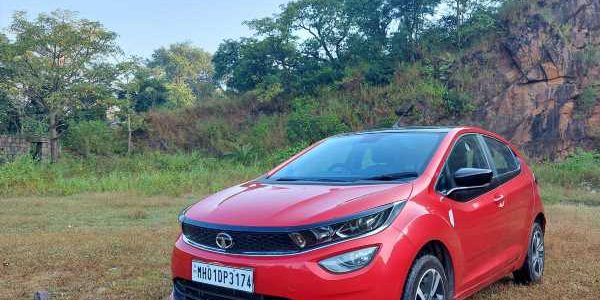 You’ve had a teaser of the Tata Altroz in the recent IPL, now know more about the car and what it feels like to drive, says Rajesh Karkera.

All photographs and videos: Hitesh Harisinghani/Rediff.com. Tata Motors has raised the bar on safety standard in Indian automobiles by successfully making the Altroz the safest car in its segment by getting a 5-star NCAP rating.

The first again to be built on the ALFA (Agile, Light, Flexible, Advanced) architecture from Tata Motors, this is the second car made on its Impact 2.0 design language, the first being the Tata Harrier. A design that stands out when parked among other vehicles.

The concept version of the Altroz, which was then named as the 45x when it was introduced in the 2018 Auto show in Noida, is not very different from the final product, just like the HX5 which became the Harrier.

Here’s a look at the Altroz’s exteriors along with an insane feature.

The cockpit-inspired interiors greet you once the 90-degree doors open up.

Now for the interiors.

And finally, here’s what it is to drive the Altroz Diesel with 1.5L Turbocharged Revotorq BS6 engine. which puts out [email protected] rpm of power.

The Altroz is also available in a 1.2L petrol engine version which puts out [email protected] rpm of power.

In another first in this segment, the Altroz will come with factory fitted customisation options. Customers will be able to choose what features they want in their Altroz and Tata Motors will create the car as per their choice of variant and features. Coming soon will be the turbo versions for the petrolheads, which might go from Rs 8 lakhs to 8.75 lakhs ex-showroom Mumbai, depending on the variant.