Home » Business » Tesla is on track to report its first annual profit, but its growth may be slowing. 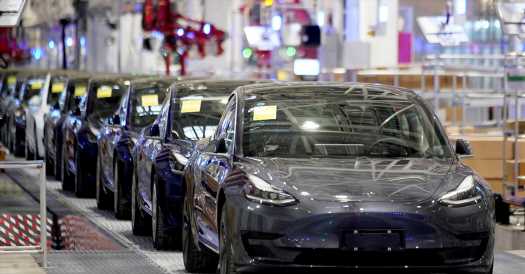 Tesla is on track to report its first annual profit, but its growth may be slowing.

Tesla on Wednesday is expected to report a profit for the fifth consecutive quarter, putting it on track to report its only annual profit since its founding in 2003.

But the company will also face questions about whether the strong sales growth it has enjoyed over the last few years is tapering off.

Analysts believe Tesla’s sales in the United States have already slowed, and they have said it may be suffering from sluggishness in other parts of the world. In China, Tesla has cut prices several times this year and sales of the Model 3 sedans it makes in Shanghai declined slightly in September compared with August and July. In Europe, the company faces growing competition from traditional automakers.

“Tesla is losing ground in Europe to fierce competitors” that have offered more affordable electric models, Vicki Bryan, the chief executive of Bond Angle, a research firm, said in a report. Ms. Bryan also said Tesla’s Model Y hatchback seemed to be taking sales away from the Model 3 rather than adding to the company’s sales.

Tesla said this month that it delivered 139,000 cars in the third quarter. That was about a 50 percent increase from the second quarter, when sales and production were severely hampered by the coronavirus pandemic.

The company’s chief executive, Elon Musk, last month appeared to temper expectations when he forecast that sales would rise 30 to 40 percent this year, implying a range of 482,000 to 514,000 cars.

Tesla’s profits have often been helped by the sale of credits to other automakers who need them to meet environmental regulations. In the second quarter, the company reported $428 million in credit revenue.

While several automakers have introduced electric vehicles, Tesla so far has faced little serious competition. But that could change over the next year or so.

On Tuesday evening, General Motors offered a preview of a battery-powered and technology-packed Hummer pickup truck that it plans to begin selling in about 12 months. The Hummer EV is supposed to go 350 miles or more on a single charge — in line with Tesla’s top models. Cameras embedded all around the truck allow drivers 18 different views of where the vehicle is going and what it is driving over. All four wheels will have the ability to turn, allowing it to drive diagonally, a feature G.M. is calling “Crabwalk.” G.M. promises the truck will be able to charge enough to travel 100 miles in just 10 minutes.

The Hummer EV is meant to compete with Tesla’s pickup, the Cybertruck, which is supposed to go into production late next year.