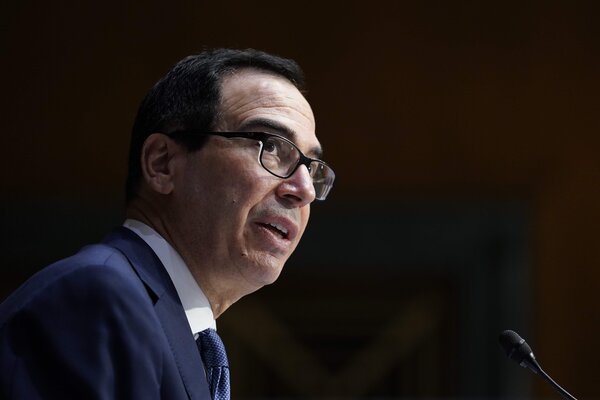 The fallout from the breach spreads

Each passing day brings new revelations about the SolarWinds hack that infiltrated the systems of U.S. government agencies and major companies. But yesterday yielded a major — and concerning — disclosure: The Russian hackers behind the attack broke into the email system used by top officials at the Treasury Department in July.

Why that’s alarming: “The Treasury Department ranks among the most highly protected corners of the government because of its responsibility for market-moving economic decisions, communications with the Federal Reserve and economic sanctions against adversaries,” The Times’s David Sanger and Alan Rappeport note.

Senator Ron Wyden, who initially disclosed the Treasury breach, said that “dozens of email accounts were compromised,” including in the division where Treasury’s top officials operate. It doesn’t appear that Treasury Secretary Steven Mnuchin’s email account was breached.

Mr. Wyden said that “Treasury still does not know all of the actions taken by hackers, or precisely what information was stolen.” Mr. Mnuchin told CNBC that classified information did not appear to have been infiltrated.

More victims of the hack. Computers at least two dozen organizations — including Cisco, Intel, Nvidia, Deloitte and the California Department of State Hospitals — appear to have been hacked, The Wall Street Journal reports. Some of the groups, like Intel and Deloitte, said the attack didn’t affect their most sensitive systems.

Experts worry that President Trump is hurting recovery efforts. Although top officials, including Secretary of State Mike Pompeo and Attorney General Bill Barr, said they believed that Russia had directed the breach, Mr. Trump played down Moscow’s likely role and suggested China as an alternate suspect. And White House officials were reportedly ordered not to release a statement calling Russia “the main actor” in the attack, The Associated Press reported.

“Some security experts fear the president’s position will transform what should be a unified government response to a hostile act by a foreign power into yet another personal loyalty test,” according to Ina Fried and Scott Rosenberg of Axios.

Tesla’s bumpy first day in the S&P 500. Shares in the electric carmaker fell more than 6 percent yesterday after it was added to the benchmark stock index. The S&P itself fell just 1 percent, suggesting that investors were cashing out of the latest run-up in Tesla shares … and were perhaps worried about news of a potential rival (more below).

Winners and losers from the latest news on Apple’s car plans. While Tesla’s shares fell, those in Apple rose more than 1 percent after Reuters reported that the iPhone maker aims to produce a personal passenger vehicle by 2024, relying on “breakthrough” battery technology. Shares in makers of lidar sensors, which use lasers to help computers navigate their environment, surged over 20 percent as well.

Google reportedly struck an antitrust defense pact with Facebook. The tech giants agreed to “cooperate and assist one another” if they face any investigations into their partnership in online advertising, The Wall Street Journal reported, citing an unredacted draft of the lawsuit filed by 10 states. A Google spokesman said that such agreements were common.

Biden adds a Warren confidant to his economic team. The president-elect named Bharat Ramamurti, a former aide to Senator Elizabeth Warren, as deputy director of the National Economic Council in charge of financial reform and consumer protection. The selection adds another progressive voice to Mr. Biden’s economic advisers amid pressure from the left.

The studio behind James Bond is said to be considering a sale. MGM Holdings has hired Morgan Stanley and LionTree to begin a formal sale process, The Journal reported. One factor behind the move may be poor performance by its biggest shareholder, Anchorage Capital Group. Potential bidders may include Hollywood rivals, private equity and SPACs.

Late last night, Congress overwhelmingly passed the $900 billion federal aid compromise, one of the largest in modern U.S. history, and President Trump is expected to sign it into law. More details have emerged on what the bill contains — and its arrival comes as the economy it’s intended to help appears to be in ever-worse shape.

About $166 billion in direct aid could be sent to Americans as soon as next week, Treasury Secretary Steven Mnuchin said yesterday. About $325 billion in small-business aid — including $285 billion in new Paycheck Protection Program loans and $20 billion for businesses in low-income communities — is also part of the package. (Here’s a good summary of what’s inside the enormous bill.)

The drama behind the stimulus’s passage suggests that moderates may be the key to President-elect Joe Biden’s agenda: “In the long run, this is the way to govern,” Representative Josh Gottheimer, Democrat of New Jersey, told The Times’s Carl Hulse.

Not everyone is happy about it: Six Republican senators voted against the bill, while economists and progressives had argued for more relief.

Things are getting bleaker. Communities in California and elsewhere still face economic restrictions as intensive-care operations are overburdened, and the issue of federal direct aid to states was left out of the $900 billion aid bill. Concerns about a new, apparently more transmissible coronavirus variant spreading through Britain roiled markets yesterday, as governments around the world blocked travel from the U.K.

“Massive shutdowns in Europe are a harsh reminder we aren’t out of the woods yet,” Ryan Detrick, the chief market strategist for LPL Financial, told The Times.

Equal footing to climate change. Given that racial equity is a high-profile objective of Mr. Biden’s administration, Mr. Johnson said it deserved a dedicated role in the same way that John Kerry has been tapped as climate envoy. “Racial equity is as important as any priority that he’s had in mind, and should be equal, considering the current political environment,” Mr. Johnson said.

Learning from the private sector. Corporate America’s efforts to promote diversity via roles focused on diversity and inclusion have a mixed record, but Mr. Johnson said creating a position that reports directly to Mr. Biden would solve a major problem: a lack of authority.

Coretha Rushing, a managing director at Merryck & Company, an executive coaching firm, said the key would be for the administration to broadly prioritize the issue. “You may assign a person that role — but when you’re talking about something that’s so embedded in the culture and how you operate, it really is almost everybody’s job,” she said.

It has become an annual tradition over the past decade: Some of society’s wealthiest sign up to the Giving Pledge, promising to give a majority of their riches to philanthropy during their lifetimes or in their wills. This year’s class of 13 includes some notable names (with a combined estimated net wealth of $40 billion), including:

Steve Schwarzman, the Blackstone co-founder and C.E.O., whose estimated net wealth is over $21 billion

Bill Gross, the Pimco co-founder once known as the “bond king”

Rich Barton, the Zillow co-founder and C.E.O., and his wife, Sarah

The love story everyone’s reading about

Since Sunday night, Topic A in virtual water-cooler chats and on Twitter has been the tale of Christie Smythe. The former Bloomberg News reporter helped break the story of Martin Shkreli’s arrest in 2015 — and then later, as outlined in an Elle article, fell in love with the pharma executive vilified as “the most hated man in America.”

“I started to fall for him, I think, after he got thrown in prison,” Ms. Smythe told The Times’s Katie Robertson, referring to Mr. Shkreli’s jailing in 2017. She continued to cover Mr. Shkreli through his sentencing in 2018, but resigned after editors warned her over her social media posts about him. She visited Mr. Shkreli in prison — talking “about Picasso, about philosophy, about her dog and his cat” — and intended to write a book that didn’t paint the “pharma bro” as a villain. She later divorced her husband.

Ms. Smythe wrote to a federal judge in April asking — as Mr. Shkreli’s life partner — for him to be released from prison to work on a cure for Covid-19. But Mr. Shkreli ended their relationship after learning that she was cooperating on the Elle article.

“I don’t like being called ‘the victim,’ ‘mentally ill,’” Ms. Smythe said in a follow-up interview with Elle. She said her book proposal had gotten “a couple of nibbles” from potentially interested publishers since the original article was published. (She also said she was “open” to dating again.)

Peloton will buy the exercise equipment maker Precor for $420 million to expand its commercial offerings and manufacturing capacity. (TechCrunch)

Ripple, the cryptocurrency company, expects to be sued by the S.E.C. over the sale of its digital token, which the agency will say violated investor protection laws. (NYT)

Google signed a cloud-computing deal with Aramco, the state-controlled Saudi oil producer, despite employee concerns about working with the fossil-fuel industry. (Bloomberg)

Not all Silicon Valley giants are leaving California. Here’s why. (Protocol)

Best of the rest

The U.S. Postal Service is struggling to deliver packages by Christmas because of budget cuts and the pandemic. (WaPo)

We’d like your feedback! Please email thoughts and suggestions to [email protected]