Home » Business » The Mueller Report’s Free, but Publishers Are Selling It as a Book

The Mueller Report’s Free, but Publishers Are Selling It as a Book

The report from the special counsel, Robert S. Mueller III, was finally released on Thursday and already numerous publishers were seeking to profit from it.

“The wait is over,” promised Skyhorse, an independent publisher of “The Mueller Report: The Final Report of the Special Counsel in Donald Trump, Russia, and Collusion.” With a foreword by Alan Dershowitz, a Harvard Law School professor who has been critical of Mr. Mueller’s investigation and who has been praised by President Trump, it is already an Amazon best seller, ranked No. 1 in the “Biographies of Espionage” category.

Right behind it is “The Mueller Report,” an offering from The Washington Post and the Simon & Schuster imprint Scribner that promises “exclusive analysis” by members of the newspaper’s Pulitzer Prize-winning staff. Brian Belfiglio, vice president and director of publicity at Scribner, said that the imprint expects to publish an e-book on Friday, and that the trade paperback edition would be available on April 26 or earlier.

Barnes & Noble is also offering free downloads of the report as a digital Nook book through its in-house publishing company, Sterling Publishing. And Melville House Books — an independent publisher of literary fiction, nonfiction and poetry — will soon be selling the report as a paperback and an e-book with no commentary or analysis. 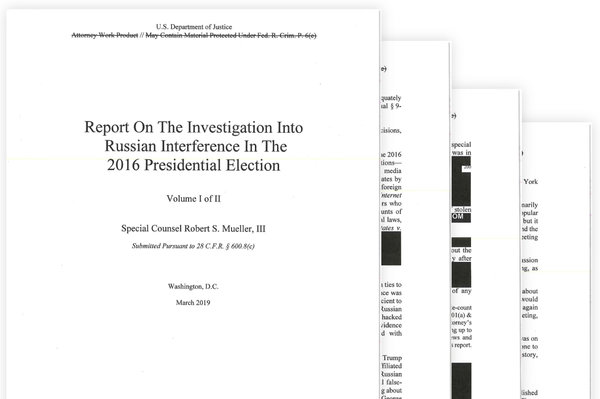 The findings from the special counsel, Robert S. Mueller III, are now available to the public. The redacted report details his two-year investigation into Russian interference in the 2016 presidential election.

Never mind that the 448-page report on Russian interference in the 2016 presidential election can be read for free on the Department of Justice website. (It is also available on many news sites, including that of The New York Times, which is not publishing the report in book form, according to Danielle Rhoades Ha, a Times spokeswoman. She said The Times is planning to publish a 16-page special print section on Friday that will include summaries and highlights of the newspaper’s annotations of the report.)

[Read excerpts from the Mueller report and analysis from Times reporters.]

By contrast, various publishers are charging from $1.99 for an e-book to $12.99 for a paperback edition of the Mueller report.

Books based on government documents are common, particularly in the aftermath of events that have captured the public’s interest and shaped the country’s history.

In 1998, for example, The Post and the publisher PublicAffairs released a paperback version of “The Starr Report: The Findings of Independent Counsel Kenneth W. Starr on President Clinton and the Lewinsky Affair.” And in 2011, the National Archives and Nimble Books published “The Pentagon Papers,” the report commissioned by Secretary of Defense Robert S. McNamara in 1967 that led to the end of the Vietnam War.

More recently, in 2014, Melville House, which is based in Brooklyn, published “The Senate Intelligence Committee Report on Torture: Committee Study of the Central Intelligence Agency’s Detention and Interrogation Program.” The report was based on more than six million internal documents from the C.I.A. that explore interrogation practices, prisoner deaths and agency practices. Senator Dianne Feinstein, a Democrat from California, wrote the foreword.

Skyhorse listed Mr. Mueller as an author of its book, but don’t expect him to benefit. Under federal law, work prepared by the United States government is in the public domain.

Manafort Pleads Guilty To Conspiracy Charges, To Cooperate With Mueller

Trump Slams Mueller Team As "Disgrace To Our Nation"

Trump Foundation To Be Dissolved Amid Ongoing NY Lawsuit