It has quietly outgrown Topshop to become the UK’s sixth-largest fashion group. Now TK Maxx is hoping a glut of unsold clothing from rivals will further boost its fortunes.

The cut-price US-owned retail group sells an eclectic mix from a Moschino-collared jacket at £99.99, to a Gucci handbag at nearly £1,000 and Sloggi knickers at £2.99. It may only stock one or two pieces of each style or a few items of big-name beauty or homewares brands, but the low prices attached – the Gucci bag is £450 cheaper than its recommended retail price – are key to its appeal.

Beloved by bargain hunters, TK Maxx snaps up mostly in-season fashions which department stores, brands and high-street chains have been unable to sell. That stock comes from 21,000 different sources around the world and is mainly excess production, cancelled orders or overstocks. A small amount is made especially for the chain by brands or for its own labels, which include Arabella, Addison and Amaryllis.

“We are confident the mix in the second half is going to be very exciting,” says Deborah Dolce, director of the owner, TJX’s, European division, as she eyes the rails in the group’s new store in Uxbridge, west London. “Because we buy in an agile way, we can respond to the stock in the market.”

She says the group is not only able to snap up fashion stocks but to rapidly shift into the hot categories – currently beauty, homewares and children’s clothing – to meet demand.

Shop managers alter the layout of their store to suit the changing stock, with all shelving on wheels so departments can be enlarged or shrunk to suit what has arrived in the latest shipment. There are no stockrooms – everything goes straight out on to the shop floor.

TK Maxx’s tactic of buying product little and often has also enabled it to keep tight control of its stock while shopper numbers were low and increase supply as shoppers became more confident.

In the month between stores reopening in July – when most high street lockdowns ended – and 1 August, sales in the group’s international arm, largely made up of its UK business, but also including stores in Germany, Ireland, Poland, the Netherlands and Australia, declined by 1% year-on-year. The UK business, the only one in Europe to have an online store, performed better, Dolce says, although she did not give exact figures.

Pizza Express – 1,100 jobs
7 September: The restaurant chain confirms the closure of 73 restaurants as part of a rescue restructure deal.

Costa Coffee – 1,650 jobs
3 September: The company, which was bought by Coca-Cola two years ago, is cutting up to 1,650 jobs in its cafes, more than one in 10 of its workforce. The assistant store manager role will go across all shops.

Pret a Manger – 2,890 jobs
27 August: The majority of the cuts are focused on the sandwich chain’s shop workers, but 90 roles will be lost in its support centre teams. The cuts include the 1,000 job losses announced on 6 July.

DW Sports – 1,700 jobs at risk
3 August: DW Sports fell into administration, closing its retail website immediately and risking the closure of its 150 gyms and shops.

Ted Baker – 500 jobs
19 July: About 200 roles to go at the fashion retailer’s London headquarters, the Ugly Brown Building, and the remainder at stores.

Azzurri – 1,200 jobs
17 July: The owner of the Ask Italian and Zizzi pizza chains closes 75 restaurants and makes its Pod lunch business delivery only

Burberry – 500 jobs worldwide
15 July: Total includes 150 posts in UK head offices as luxury brand tries to slash costs by £55m after a slump in sales during the pandemic.

Boots – 4,000 jobs
9 July: Boots is cutting 4,000 jobs – or 7% of its workforce – by closing 48 opticians outlets and reducing staff at its head office in Nottingham as well as some management and customer service roles in stores.

John Lewis – 1,300 jobs
9 July: John Lewis announced that it is planning to permanently close eight of its 50 stores, including full department stores in Birmingham and Watford, with the likely loss of 1,300 jobs.

Pret a Manger – 1,000 jobs
6 July: Pret a Manger is to permanently close 30 branches and could cut at least 1,000 jobs after suffering “significant operating losses” as a result of the Covid-19 lockdown

Casual Dining Group – 1,900 jobs
2 July: The owner of the Bella Italia, Café Rouge and Las Iguanas restaurant chains collapsed into administration, with the immediate loss of 1,900 jobs. The company said multiple offers were on the table for parts of the business but buyers did not want to acquire all the existing sites and 91 of its 250 outlets would remain permanently closed.

SSP Group – 5,000 jobs
1 July: The owner of Upper Crust and Caffè Ritazza is to axe 5,000 jobs, about half of its workforce, with cuts at its head office and across its UK operations after the pandemic stalled domestic and international travel.

Harrods – 700 jobs
1 July: The department store group is cutting one in seven of its 4,800 employees because of the “ongoing impacts” of the pandemic.

Harveys – 240 jobs
30 June: Administrators made 240 redundancies at the furniture chain Harveys, with more than 1,300 jobs at risk if a buyer cannot be found.

Monsoon Accessorize – 545 jobs
11 June: The fashion brands were bought out of administration by their founder, Peter Simon, in June, in a deal in which 35 stores closed permanently and 545 jobs were lost.

Mulberry – 470 jobs
8 June: The luxury fashion and accessories brand is to cut 25% of its global workforce and has started a consultation with the 470 staff at risk.

The Restaurant Group – 3,000 jobs
3 June: The owner of dining chains such as Wagamama and Frankie & Benny’s has closed most branches of Chiquito and all 11 of its Food & Fuel pubs, with another 120 restaurants to close permanently. Total job losses could reach 3,000.

Clarks – 900 jobs
21 May: Clarks plans to cut 900 office jobs worldwide as it grapples with the growth of online shoe shopping as well as the pandemic.

Oasis and Warehouse – 1,800 jobs
30 April: The fashion brands were bought out of administration by the restructuring firm Hilco in April, with all of their stores permanently closed and 1,800 jobs lost.

Cath Kidston – 900 jobs
21 April: More than 900 jobs were cut immediately at the retro retail label Cath Kidston after the company said it was permanently closing all 60 of its UK stores.

Debenhams – 4,000 jobs
9 April: At least 4,000 jobs will be lost at Debenhams in its head office and closed stores after its collapse into administration in April, for the second time in a year.

Laura Ashley – 2,700 jobs
17 March: Laura Ashley collapsed into administration, with 2,700 job losses, and said rescue talks had been thwarted by the pandemic.

Overall, sales for the international division fell 31% to $880m (£690m) in the three months to 1 August and slumped to a $131m loss from a $50.4m profit in the same period a year before, as the chain’s high-street stores were forced to shut during the pandemic.

However, the UK division has proved more resilient than many rivals. As the likes of Debenhams, House of Fraser and John Lewis all closed outlets permanently, TK Maxx was still looking to expand, mainly through its Home Sense homewares chain, by taking the same “opportunistic” tactic on property as with fashion. “We think of this as a modern-day version of the department store,” says Dolce.

The group, founded as TJ Maxx 43 years ago in Massachusetts, and now listed on the New York stock exchange, launched as TK Maxx in the UK in 1994 with a store in Bristol.

While many high-street fashion businesses have shrunk, TK Maxx’s sales have risen by more than 30% since 2016, with further growth expected to be announced next month for the year to February, when the company files its UK numbers at Companies House.

During that time it has opened 45 TK Maxx outlets and nearly 40 more of its Home Sense homewares outlets, to build a portfolio of 427 UK stores, including 349 of its core chain. All the group’s UK stores have reopened since lockdown, including two new outlets in Uxbridge and York.

“Alongside Primark and JD Sports, TK Maxx is one of the winners in clothing in the last five years,” says Patrick O’Brien at retail analysts GlobalData. “It has benefited from a focus on brands and the fact its been able to negotiate deals through a period of immense discounting, when so many retailers have been overstocked. Brands which wouldn’t necessarily have wanted stuff to go in TK Maxx have had to rethink.

“It’s not Primark-cheap but there is value in terms of what you think you are getting for the money.”

He says the company has struggled to transfer its “treasure hunt” experience online, which may make life difficult during the ongoing coronavirus crisis. But with only an estimated 16% sales via the internet, it still has plenty of chance to expand there.

Dolce says TK Maxx shoppers are prepared to queue outside stores as it implements social distancing, because economic pressures mean there is even more appetite for a potential bargain. 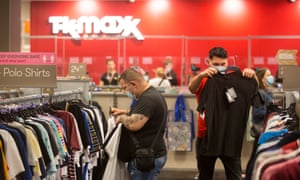 “The real opportunity for this business is that the quest for value has become very very strong. People are going to be thoughtful about money, having experienced 2020. They don’t want to compromise on quality, so they seek value and that’s our bullseye offer,” she says.