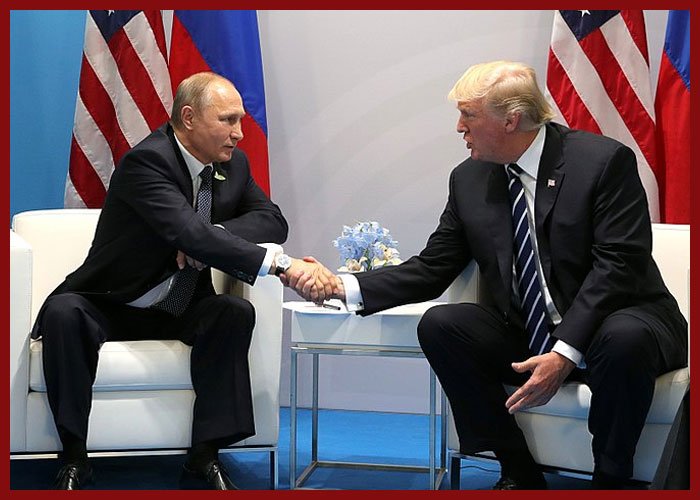 President Donald Trump on Monday reiterated his claim that there was “no collusion” between his presidential campaign and Russia and noted Russian president Vladimir Putin was “extremely strong” in his denial of interfering in the 2016 election.

During a press conference with Putin following their highly anticipated meeting, Trump declined to say whether he believed the intelligence community’s conclusion that Russia meddled.

“You have groups that are wondering why the FBI never took the server. Why haven’t they taken the server?” Trump said when asked about alleged Russian interference in the election.

Trump questioned why Russia would be interested in interfering in the election then once again stated that he wants to see the DNC’s server.

The meeting between Trump and Putin came amid special counsel Robert Mueller’s ongoing investigation of Russian meddling in the election and possible collusion with the Trump campaign.

Last Friday, Mueller obtained an indictment against 12 Russian intelligence officers for crimes intended to interfere with the election, leading some lawmakers to call on Trump to cancel the meeting.

Putin claimed he did not know the “full extent of the situation” regarding the 12 indicted officers and said he would look into the issue.

The Russian president suggested Mueller should come to Russia as part of a joint investigation that includes reciprocation by the U.S. in terms of Americans the Russian government suspects of criminal activity.

Ahead of the meeting, Trump argued in a post on Twitter that U.S.-Russian relations have never been worse “thanks to many years of U.S. foolishness and stupidity.”

“Our relationship has never been worse than it is now,” Trump reiterated at the press conference. “However, that changed as of about four hours ago. I really believe that”

Trump said he holds both countries responsible for the strained relationship but claimed the Mueller investigation is part of the problem.

Trump has repeatedly described the Russia investigation as a “witch hunt” and has sought to blame former President Barack Obama’s administration for the alleged interference.

The president’s performance at the press conference quickly drew harsh criticism from both sides of the aisle, with former CIA Director John Brennan calling it “nothing short of treasonous.”

“Donald Trump’s press conference performance in Helsinki rises to & exceeds the threshold of ‘high crimes & misdemeanors.’ It was nothing short of treasonous,” Brennan tweeted.

He added, “Not only were Trump’s comments imbecilic, he is wholly in the pocket of Putin. Republican Patriots: Where are you???”

“I never thought I would see the day when our American President would stand on the stage with the Russian President and place blame on the United States for Russian aggression. This is shameful,” Flake tweeted.