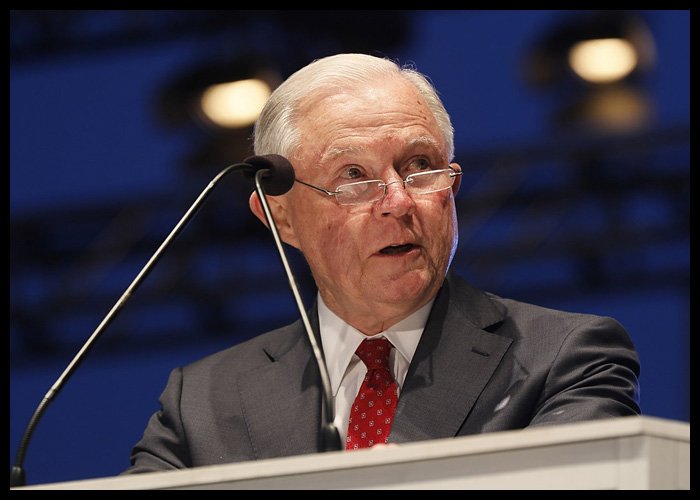 President Donald Trump took another swipe at the nation’s top law enforcement officer in a post on Twitter on Tuesday, seeming to blame Attorney General Jeff Sessions for the ongoing investigation of Russian meddling in the 2016 presidential election.

“‘They were all in on it, clear Hillary Clinton and FRAME Donald Trump for things he didn’t do.’ Gregg Jarrett on @foxandfriends,” Trump tweeted.

He added, “If we had a real Attorney General, this Witch Hunt would never have been started! Looking at the wrong people.”

Trump has previously been critical of Sessions’ decision to recuse himself from the Russia investigation over undisclosed meetings with the Russian ambassador.

The president has suggested he would have picked someone else for Attorney General if he knew Sessions was going to recuse himself.

In subsequent tweets, Trump continued his attacks on former FBI agent Peter Strzok, who was fired last Friday for sending anti-Trump texts during the presidential campaign.

“Fired FBI Agent Peter Strzok is a fraud, as is the rigged investigation he started. There was no Collusion or Obstruction with Russia, and everybody, including the Democrats, know it. The only Collusion and Obstruction was by Crooked Hillary, the Democrats and the DNC!” Trump tweeted.

He added, “Strzok started the illegal Rigged Witch Hunt – why isn’t this so-called ‘probe’ ended immediately? Why aren’t these angry and conflicted Democrats instead looking at Crooked Hillary?”

Earlier this month, Trump called on Sessions to immediately bring an end to special counsel Robert Mueller’s investigation, although the Attorney General purportedly does not have the authority to end the probe due to his recusal.

Deputy Attorney General Rod Rosenstein appointed Mueller to lead the investigation in May of 2017 after Sessions recused himself.

Cohen Reportedly Taped Conversation With Trump About Payments To Ex-Playmate