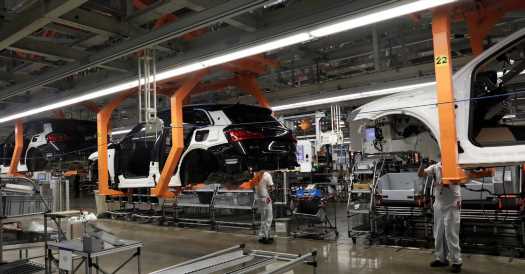 WASHINGTON — A government report has concluded that the Trump administration’s revised North American trade agreement would offer modest benefits to the economy, challenging the president’s claims that the accord would make far-reaching changes.

Mr. Trump has reviled the quarter-century-old North American Free Trade Agreement as the worst trade pact in existence and blamed it for pushing up the trade deficit, or the gap between what the country imports and what it exports. Over the past year and a half, he gave his administration a mandate to improve the pact. In November, Canada, Mexico and the United States signed an updated accord, which the president rebranded as the United States-Mexico-Canada Agreement, and the new deal is awaiting ratification from legislators in all three countries.

On Thursday, the United States International Trade Commission, a government body, released an independent analysis of the accord’s potential effects on the country’s economy, a report required by law before Congress votes on the deal.

The report found that the agreement would increase gross domestic product by 0.35 percent after inflation, or $68.2 billion, and create 175,700 jobs — fewer than the average job gains nationwide in recent months. It would increase United States trade with Canada and Mexico by about 5 percent, as well as provide a modest lift to agriculture, services and manufacturing activity.

Critics of the accord seized on the findings. “This report confirms what has been clear since this deal was announced — Donald Trump’s Nafta represents at best a minor update to Nafta, which will offer only limited benefits to U.S. workers,” said Senator Ron Wyden, Democrat of Oregon.

Kevin Hassett, the chairman of the president’s Council of Economic Advisers, said he believed that the report had underestimated some of the deal’s economic benefits, including provisions on intellectual property. But he said he was encouraged that the commission had shown a bigger economic gain than from past trade agreements.

“I think that should be reassuring to anyone who is on the fence on this bill,” he said.

Since negotiations began in August 2017, the administration has secured some substantive changes to Nafta, including modernizing protections on digital trade, adding labor and environmental protections, opening up the Canadian dairy market and adding rules to restrict governments from manipulating their currency.

Many of the changes have been updates to Nafta’s existing framework, while other improvements were drawn from the Trans-Pacific Partnership, a 12-country trade deal negotiated by the Obama administration. Mr. Trump withdrew the United States from that agreement days after taking office, before Congress could act on it.

The Trump administration has also tightened regulations on how cars are manufactured — for example, raising the percentage of a vehicle that needs to be made in North America for it to be tariff-free — to encourage automaking in the United States.

The commission’s report projected that rule changes in the automotive sector would result in many of the largest economic changes from the pact. It estimated that rules designed to bolster American manufacturing would add more than 28,000 jobs and increase investment by $683 million per year.

But by raising the cost of producing cars, the auto provisions would actually reduce American car exports and weigh on the economy over all, the report said.

Those figures clashed with a rosier analysis of the automotive effects of the deal released by the Trump administration. Based on information provided by North American automotive manufacturers, the United States trade representative’s office estimated Thursday that the rule changes would result in $34 billion in investments in the United States, as well as $23 billion in annual purchases of American-made parts and 76,000 American jobs, all within five years.

A senior official in the trade representative’s office said Thursday that the deal’s auto provisions were “a substantial factor” in investments announced by Ford, General Motors, Toyota, Volkswagen and others. He said the updates to the agreement would close loopholes allowing companies to use more parts from countries like China and would help build an industry for autonomous and alternative-energy vehicles.

The trade commission’s model essentially simulates what the United States economy of 2017 would have looked like had the new agreement been in place then. It makes several assumptions that could affect the economic impact, including the premise that there is little room for the economy to add additional jobs without also driving up wage growth for workers.

Perhaps most notably for Mr. Trump, who views America’s trade deficit as a measure of economic success, the model assumes no change in the balance of trade between the United States, Mexico and Canada.

Some of the largest economic benefits of the pact, according to the trade commission, would come from the parts of the deal that codify the free flow of data across borders — measures that have been supported by technology companies.

Industry groups called for the pact’s quick passage into law. Linda Dempsey, the vice president for international economic affairs at the National Association of Manufacturers, said that the deal was “a win for manufacturers.”

Jordan Haas, the director of trade policy at the Internet Association, said the report underlined that the deal’s digital trade provisions were “critical to America’s future economic success” and “mean jobs and opportunities in every state.”

Senator Charles E. Grassley, the Iowa Republican who is chairman of the Senate Finance Committee, said he was glad to see that the commission had recognized the new economic benefits of the pact. Updates to rules in a variety of areas including intellectual property and digital trade “will be valuable to many American farmers and businesses, even though their impact on G.D.P. has historically been inherently difficult for economists to measure,” Mr. Grassley said.

Still, the trade commission’s report is likely to add fuel to criticisms of the agreement, especially among some Democrats, who have criticized the deal’s environmental, labor and pharmaceutical provisions.

The Trump administration began the trade negotiations with the aim of appealing to more populist Democrats, who have long criticized Nafta for sending jobs out of the country. That support is more critical than ever for the administration, since the pact will probably need at least two dozen Democratic votes to pass the House of Representatives if every Republican votes for it, an outcome that is not guaranteed.

The revised deal includes changes meant to court labor unions and liberal politicians, including a minimum-wage requirement for the auto industry and the end of a special system of arbitration for corporations.

But as a vote in Congress approaches, opposition on the left appears to be hardening. Democrats say they are concerned that the agreement won’t adequately protect the environment and labor rights, and that its intellectual-property protections for the pharmaceutical industry could undermine legislative efforts to make health care more affordable.

While some Republican lawmakers objected to the Trump administration’s negotiating goals during the talks, most now appear to support the deal’s passage, in part to provide more certainty to companies in their districts.

The Week in Business: Jeff Bezos’ Private Texts, and More ‘Fog’ in London

DealBook Briefing: From Corporate America to China, Everyone’s Braced for the Midterms

Voter Suppression and Racial Targeting: In Facebook’s and Twitter’s Words

The Week in Business: ’Twas the Week After Christmas, and Markets Were Stirring
Business
Industies News