Home » Business » Two Down, Two To Go For Ardelyx 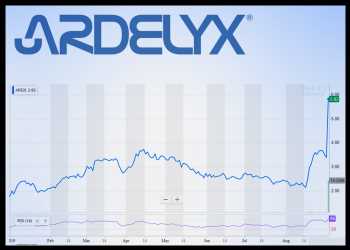 Two Down, Two To Go For Ardelyx

Shares of Ardelyx Inc. (ARDX) closed at a new 52-week high of $5.82 yesterday, a gain of over 70% in one day, thanks to the second positive hyperphosphatemia study, dubbed AMPLIFY.

When the kidneys are damaged, they will no longer be able to regulate the amount of phosphorus in the blood. In other words, when the kidneys fail to remove extra phosphorus from the body, it can lead to phosphorus buildup. It also increases the risk of cardiovascular disease in patients.

Phoslo, Renagel/Renvela, Velphoro, Fosrenol, and Auryxia are some of the phosphate binders indicated for the treatment of hyperphosphatemia.

AMPLIFY is a pivotal phase III study, which evaluated Ardelyx’s investigational drug Tenapanor in combination with phosphate binders in patients with chronic kidney disease on dialysis whose hyperphosphatemia was not previously controlled with binders alone.

During the treatment period, up to 49.1% of patients in the Tenapanor arm of the AMPLIFY study achieved serum phosphorus of less than 5.5 mg/dL which was statistically significant compared with up to 23.5% in the binder arm.

The Company’s first hyperphosphatemia study evaluated Tenapanor as a monotherapy in patients with end-stage renal disease, and positive results were reported from this study in February 2017.

A second phase III monotherapy study of Tenapanor in end-stage renal disease patients on hemodialysis and peritoneal dialysis, dubbed PHREEDOM, is underway, with results expected in the fourth quarter of this year.

Tenapanor is also being explored as a treatment for irritable bowel syndrome with constipation (IBS-C), and the drug candidate is under FDA review for that indication, with a decision expected on September 12, 2019.

Current FDA approved irritable bowel syndrome and constipation medications like Trulance and Zelnorm work to alleviate constipation through the secretion of chloride in the GI tract, and improve symptoms in only some patients. If approved, Tenapanor would be the first medication available to treat constipation that works by reducing sodium uptake from the gut.

During its glorious days in 2014, in the months of October to December, Ardelyx shares were trading in the range of $19 to $32. Now, the stock price is in single digit.

As Ardelyx prepares for its two anticipated events, it’s time to watch out for this stock, if it hasn’t caught your eyes yet.