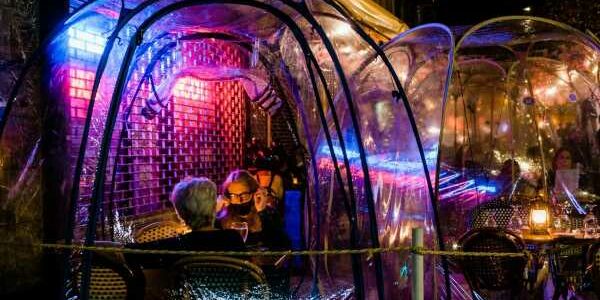 U.S. deaths from the coronavirus surpassed 250,000, marking a grim milestone as the nation struggles to contain a new surge in cases. New York City, the country’s early virus epicenter, said it will shut schools after infections crossed a critical threshold.

Pfizer Inc. said a final analysis of clinical-trial data showed its vaccine was 95% effective, paving the way for the company to apply for the first U.S. regulatory authorization for a coronavirus shot within days.

In Europe, a protest over Germany’s strategy to quell the virus turned violent. Poland reported record daily deaths and Italy’s fatalities rose by the most in seven months. France showed an easing in its outbreak, while Geneva will relax some restrictions.

U.S. deaths from the coronavirus surpassed 250,000, according to Johns Hopkins University data. The tally is the highest in the world and comes as the country is struggling with a new surge in cases from coast to coast.

New York state has the most U.S. deaths, at more than 34,000, according to Johns Hopkins. Texas is second, followed by California and Florida.

Arizona will launch coronavirus testing sites at the airports and direct $25 million to help hospitals with staffing as the state faces rising cases and anticipates holiday travel, Governors Doug Ducey said Wednesday. Hospitals can use the funding, from the federal CARES Act, to give frontline workers bonuses or to pay for higher costs.

Getting back to normal “isn’t in the cards right now,” Ducey said. He emphasized the importance of wearing masks, even as he has yet to mandate them statewide despite the pleas of local officials such as Phoenix Mayor Kate Gallego.

Ducey said 90% of the state is already under local mask mandates and that they are more successful with buy-in from local leaders. He wants to avoid “division and politics” around the issue, he said.

Wisconsin Governor Tony Evers said he will extend into January a peacetime emergency and reissue an order requiring face masks because of an alarming increase in Covid-19 cases statewide.

“It’s clear, based on where we’re headed, we can’t afford to stop or have a gap in some of the only mitigation efforts we still have in place,” Evers said. He said he’ll sign the orders no later than Saturday, when the current mask mandate expires.

The rate of Covid-19 infection in Wisconsin is accelerating. Less than two months ago, the seven-day average of new Covid-19 cases was about 1,800 cases a day. As of Tuesday, the average exceeded 6,400 cases a day. More than 2,700 Wisconsinites have died of the disease, and Evers said independent research has predicted deaths could double by Dec. 31 unless effective mitigating strategies are adopted.

Virus caseloads are soaring across Texas as new hot spots emerge and hospitals strain to handle the inflow.

In Lubbock, there are no available hospital beds and city officials plan to shut sports venues through at least the end of the year. The oil drilling and refining centers of Midland and Beaumont — on opposite ends of the state and almost 600 miles (965 kilometers) apart — are also becoming hot spots.

In El Paso, the biggest case clusters identified by public health officials are menacing nursing homes, jails and hospitals, according to city and county data.

Freezers required to store Covid-19 vaccines are in place at health systems that are preparing to administer the initial doses once the shots receive a green light from regulators, U.S. health officialssaid Wednesday.

The federal government will have 40 million doses ready to distribute by the end of December should vaccines developed by Pfizer Inc. and its partner BioNTech SE, and Moderna Inc. receive emergency-use authorizations, said Moncef Slaoui, chief scientific adviser of Operation Warp Speed, the effort to expedite the development and distribution of coronavirus vaccines.

Covid-19 has become the third-leading cause of death in Illinois, behind heart disease and cancer, Governor J.B. Pritzker said during a press conference on Wednesday. Average deaths per day from the virus have jumped to 83 from 14 in August, said Pritzker, who announced a series of new statewide restrictions on Tuesday to curb the spread.

Illinois on Wednesday reported 140 more Covid-19 deaths, bringing its total to 11,014, according to state data. On Oct. 26, Department of Public Health Director Ngozi Ezike said the trajectory at the time meant the state could top 11,000 deaths this year.

“It means we are in bad shape,” Ezike said Wednesday. “If we’ve exceeded all of our projections by more than six weeks, the numbers for the end of the year would just be untenable.”

New York’s recovery from the coronavirus outbreak suffered twin blows with the announcement of citywide school closings and the warning of massive cuts to public-transit service.

Parents of hundreds of thousands of kids must find alternative child-care arrangements or adjust their work schedules by Thursday, after Mayor Bill de Blasio said the city had reached a 3% positivity rate that triggered a temporary halt to in-class instruction.

Workers also face the prospect of longer commutes, after New York’s Metropolitan Transportation Authority said it will have to slash subways and buses by 40% and chop commuter rail service by half if aid doesn’t come from Washington.

New Jersey has reported daily cases in excess of 4,000 three times this week, and Governor Phil Murphy said Wednesday that some modeling showed at least double that number to come.

Murphy has lowered gathering limits to 10, from 25, for many indoor activities, and on Nov. 23 the outdoor crowd cap will be 150 people, rather than 500. “The steps we just announced over the past couple of weeks already should have some sort of an impact” on that 8,000- to 10,000-cases-per-day projection, he said at a news briefing in Trenton.

France reported 28,383 new confirmed coronavirus cases on Wednesday, with the weekly pace of infections again heading lower after an increase the previous day. Positive tests accounted for 16.2% of all testing, down more than 3 points from a week ago. Hospitalizations and the number of severely ill patients in intensive-care units both fell for a second day, with ICU occupation falling the most since May 20. Deaths linked to the virus, which trail other indicators, increased by 425 to 46,698.

Italy registered 753 deaths related to Covid-19 on Wednesday, the biggest daily increase in over seven months. New daily virus cases rose to 34,282 from 32,191 on Tuesday.

In the region around Milan, infections are slowing. New cases in Lombardy fell by about 10% versus Tuesday to 7,633, which is also about 7% lower than 7-days ago. Governor Attilio Fontana has said some restriction could be eased at the end of the month if the trend continues in coming weeks.

Turkey reported 116 new deaths from coronavirus on Wednesday, its highest daily count since April. The latest data brought Turkey’s total death toll to 11,820, according to the Health Ministry.

Turkey stopped reporting all coronavirus cases in July, and has since only reported “patients” who both test positive and display symptoms. On Wednesday there were 4,215 new patients. On Tuesday, President Recep Tayyip Erdogan announced a weekend curfew between 10 a.m. and 8 p.m.

Geneva will begin relaxing its Covid restrictions beginning Nov. 21 following a recent plateau of positive cases in the southern Swiss canton. Certain occupations, such as hairdressers, beauticians, barbers, tattooists and therapists, are permitted to work as long as they adhere to cantonal requirements. Prostitution will remain prohibited.

German Finance Minister Olaf Scholzdefended the government’s latest measures to tackle the coronavirus pandemic, saying they are accepted by most of the population of Europe’s largest economy.

Scholz spoke to Bloomberg Television after thousands of people demonstrated in Berlin against legislation approved by parliament Wednesday that expands government powers to tackle the pandemic.

“Containing the virus is critical,” Scholz said, citing polls that he said show some 80% of citizens back Chancellor Angela Merkel’s ruling coalition in their efforts to stem the spread of the disease.

More than 900 Mayo Clinic staff have contracted Covid-19 in the past two weeks, according to areport Tuesday in the TwinCities Pioneer Press.

There will be enough capacity to vaccinate the world until the end of next year, CureVac CEO Franz-Werner Haas told Bloomberg Television in an interview. How long protection lasts and what effect vaccines have on different immune systems remain to be seen, he said, reiterating that it’s good to have more than one shot. Haas said the development of vaccine stability will increase.

Iran’s actual number of daily deaths from Covid-19 could top 1,000 on certain days when probable fatalities linked to the virus are taken into account, the Health Ministry spokeswoman Sima Sadat Lari said in a televised statement on Wednesday. The country reported its deadliest day of the outbreak on Monday with 486 deaths.

Earlier, Iran reported a record jump in its daily new cases for a fourth straight day with 13,421.