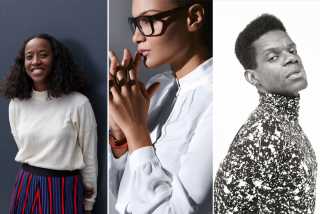 There is much more work that needs to be done in the world.

This year, the global pandemic exposed inequalities, injustices and class systems in the U.S., evidenced with dynamics between workers privileged to continue their employment from home versus essential workers that had to leave their homes to work despite rising coronavirus cases in the U.S. and others that lost their jobs because of lockdowns.

Many were not privy to or turned a blind eye to elitism and class structures in the country, but that changed in June after the killing of George Floyd. Black people in the nation and all over the world this summer led protests demanding justice and equality in their respective countries, but also exposed issues in many global industries, such as a lack of diversity at the executive level of companies.

In a conversation led by WWD executive editor Tara Donaldson, founder and chief creative officer Sindiso Khumalo, designer Stella Jean and designer and In the Blk founder Victor Glemaud picked up from where the conversations from this summer left off and began poignantly.

“There has been a lot of Black pain this year,” said South Africa-based designer Khumalo. The statement is true for every year, but the pain of 2020 was significant with the killings of Floyd at the hands of Minneapolis police officer Derek Chauvin and Breonna Taylor by members of the Louisville police force and the subsequent response.

Looters hit many retailers after the protests and the companies that were impacted responded in solidarity with the protesters and the Black Lives Matter movement. Fashion publications also showed solidarity by showcasing hundreds of active Black fashion designers, but these acts were met with skepticism from those in the industry that have experienced or witnessed discrimination and fashion’s lack of diversity.

“I think we are only at the beginning of the path that is a long one,” Jean said. The designer, who hails from Italy, added that the BLM movement increased the conversation abroad and that those companies that fail “to take an antiracist public stance has implications on brand image.”

Still, the global recognition is not enough, and not everyone has taken a stance. Glemaud agreed, saying, “this is not a new topic, but it is globally being recognized by some.”

There are many detriments to this industry due to the lack of diversity, which the panelists discussed, such as appropriation, inequity and Black designers and creatives being treated like a monolith and not unique individuals.

“The idea that we’re lumped together is not a new one,” Glemaud said. “The difference is now it’s not a couple of [Black designers], we are global, with different design references, aesthetics, context. We are all connected.”

One issue that arises with lumping Black creatives together is that industry gatekeepers will select one talent to promote on a mainstream platform, and in that, celebrating one is considered like celebrating all. Except that has never been the case. This is also apparent in companies where there is a lack of diversity. The Black employee represents an entire global community despite their unique experiences as an individual.

“You can’t pick and choose and say, ‘This is the new Black talent and no one else matters,’” Glemaud said.

The lack of diversity also contributes to designers’ missteps with celebrating different cultures. At times, what is considered to be appreciation is actually appropriation, and when ensembles inspired by cultures hit the runway, they could be misrepresented. These missteps can be prevented with open dialogue with people who understand cultural nuances.

“For decades, Black culture had been sampled without citation,” Jean said. She said designers often reduce the entire continent of Africa to a few ideas lumped together and not highlighted properly.

“The idea of superficial Africa is one that’s not new and for me,” Khumalo said. “Right now, the idea of a European designer showing in Lagos would be amazing, but European designers have taken so much of what’s going on in Lagos. We’re at the beginning of a long journey to bring the economy of the industry back to Africa and other countries.”

She added that she is well aware that the industry does not have a reciprocal relationship with African countries. That the relationship is ”a one-sided thing,” she said, but she feels that designers like Jean and brands like Studio 189 are bringing the conversation to light. “We have to be reciprocal in this and the more voices, again, that challenge this, the more it’s going to change,” she said.

In regards to inequity in the industry, Glemaud began the conversation by saying that Belgian and Japanese designers were heavily supported when they entered the American market.

“There was economic growth and movements that led to [the designers’] success,” Glemaud said. But he believes that today all designers struggle with financial issues in the industry as stores are “less open to buy” due to reduced budgets and “issues throughout the supply chain for everyone,” he said.

“How do different business structures navigate that and brand awareness and sell?” he asked. “These things need to be addressed with business awareness in mind, that’s what this is about. We sell clothes.”

Jean said the Italian fashion industry and others are at a crossroads, and she quoted Albert Einstein, saying that the system “cannot solve its problems with the same thinking we used when we created them.” She also said, “This system tailored by white people for the ultimate benefit of white people will never reflect true diversity.”

Jean and Glemaud agreed that an ideal fashion industry is one built on merit and that values talent. The three noted companies that they feel are supportive of Black designers and designers of color, including Net-a-porter and Farfetch. Khumalo mentioned Aurora James’ Fifty Percent Pledge as well, saying “retailers need to take it seriously,” and “your business needs to look like the streets they’re in.”