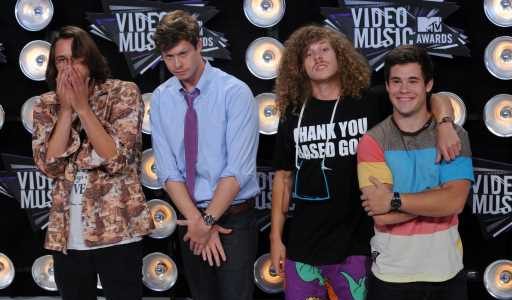 ‘Workaholics’ Stars Team On Podcast ‘This Is Important’ From iHeart Radio

Following their hit TV show Workaholics and Netflix film Game Over Man, Blake Anderson, Adam Devine, Anders Holm and Kyle Newacheck are now looking to take their talents to the podcast world with their new weekly show This Is Important. It was first mentioned by Anderson on the Barstool Sports podcast KFC Radio and made official today.

The podcast will launch this fall and be available on iHeartRadio and everywhere podcasts are heard. Each episode will have the group talking about the least important issues facing Americans today. Listeners get to be a fly on the wall for the effortlessly entertaining, genuinely hilarious conversations Devine, Holm, Anderson and Newacheck have been having since they first became best friends over a decade ago.

Some of the first topics will include Disney classics, Abs, Cereal, Best snack from 7-Eleven, Favorite Christmas Carol, Stories from childhood and their early years together, Famous people they’d bring back from the grave, Hottest Hemsworth, Pizza delivery man etiquette, Back yard wrestling, Elective procedures they’d get, Only fans and Bad doctors. Each episode will end with a recurring segment where the guys issue “take backs, apologies and complaints”

Since the end of their Comedy Central show Workaholics in 2017, the group has been very busy on their own while still remaining close. Anderson will next be seen this fall as a lead in the Hulu series Woke alongside Lamorne Morris,  with Will Gluck executive producing. Devine recently premiered Bad Ideas with QUIBI and will next be seen in the second season of The Righteous Gemstones on HBO. Holm will next be seen in Shonda Rhimes’s highly anticipated limited series for Netflix, Inventing Anna alongside Julia Garner and Anna Chlumsky

They are all repped by WME, Avalon and Morris Yorn.