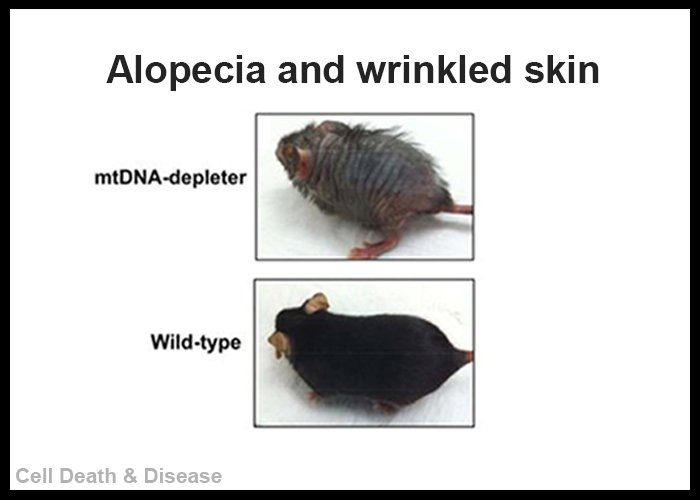 Studies on reversing the signs of aging are of considerable interest to researchers and public at large.

Aging, which is of two types intrinsic (or chronological) and extrinsic (or environmental) is accompanied by wrinkles and hair loss – something that everyone hates – and yet are considered inevitable. But what if these telltale signs of aging can be reversed?

Yes, that’s what a team of researchers at the University of Alabama at Birmingham have tried…

The researchers were able to reverse wrinkled skin and hair loss in mice by restoring mitochondrial function.

As part of the study, the researchers, led by Keshav Singh, created mitochondrial DNA (mtDNA) depleter mice expressing a dominant-negative mutation to induce depletion of mtDNA in various tissues. The mitochondrial DNA (mtDNA) depleter mice showed normal appearance until they were 8 weeks of age during which time the researchers administered doxycycline (dox) to the mice by adding the antibiotic in the food and/or drinking water for 2 months.

The addition of doxycyclin, turned on POLG1-DN transgene, which induces depletion of mitochondrial DNA, and the mice exhibited some predominant phenotypic changes like skin wrinkles and visual hair loss.

But when the researchers stopped administering doxycyclin to the mitochondrial DNA (mtDNA) depleter mice, the skin wrinkles and hair loss reverted in the experimental animals after 1 month of dox withdrawal, and they appeared relatively normal when compared to the age-matched wild-type animals.

The finding that the aging-associated phenotypic changes like wrinkled skin and hair loss could be reversed by restoring mitochondrial DNA content to normal level is unprecedented, say the researchers.

As we age, there is a decline in the function of mitochondria, which are commonly referred to as the powerhouses of the cell.

According to the researchers, “the findings of the study pave way for the development of preventative and therapeutic drug development strategies to enhance the mitochondrial functions for the treatment of aging-associated skin wrinkles and hair loss, and other human diseases in which mitochondrial dysfunction plays a significant role”.