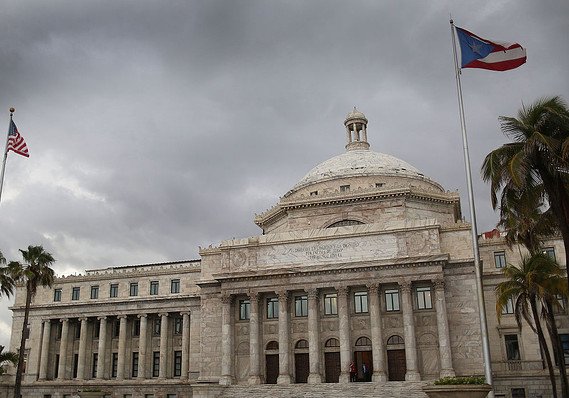 Many investors are now suffering. A 2009 Puerto Rico general obligation bond traded last month at 42 cents on the dollar.

A new academic paper suggests those market conditions may not have been as off-base as they look now, in the aftermath of a debt default, the creation of an oversight board, and bitter battles between bondholders, government officials, bond insurers, and many other counterparties.

Rather, investors may have been justified in continuing to buy what even then seemed like sketchy debt at relatively tame interest rates because they were bolstered by a belief that in a worst-case scenario, the U.S. Treasury would bail them out.

Read: Opinion: Puerto Rico’s debt stands in the way of recovery from hurricanes and austerity

The paper, from a University of Illinois at Chicago team led by Professor Bob Chirinko, suggests that for investors to keep buying debt issued by an entity in a “dire fiscal and economic situation,” there must have been what the researchers term a “Treasury put.”

A put is an option investment that allows – but does not oblige – the bearer to sell the security back to another entity at a specified price and time.

In this case, that buyer, in the minds of investors, would have been the U.S. Treasury.

There was plenty of precedent for the federal government to step in to protect investors. The most relevant example for the municipal bond market may have been in 1975, when New York City, on the brink of running out of cash, got emergency loans from Washington that had been initially refused.

The bailouts of automakers and financial institutions in 2008, and ongoing debt restructurings like the one in Greece, reinforced the idea that policymakers would usually step in to aid investors if the need was great enough.

But things changed. As the researchers put it, the Treasury put was “extinguished” in a “seismic shock” in 2013, when the city of Detroit filed for bankruptcy.

The Obama administration refused formal assistance for the city, even though its mayor reminded Washington that federal dollars and resources had been found for the automakers that had once powered Detroit’s economy.

In fact, Washington lawmakers took pains to make sure U.S. taxpayers wouldn’t be responsible for state and local fiscal distress, including introducing legislation in July 2013 that would specifically exempt federal responsibility for local pension liabilities.

Suddenly, the Puerto Rico investment thesis looked a lot different, the researchers note. And if it wasn’t glaringly obvious to the bond market, entities like Morningstar made it clear, writing, “given the current political climate in Washington, D.C., we also think it is unlikely that the federal government will offer any sort of financial bailout for Puerto Rico.”

The chart below shows Puerto Rico bond prices before and after the Detroit bankruptcy, which is portrayed by the dark red vertical line. 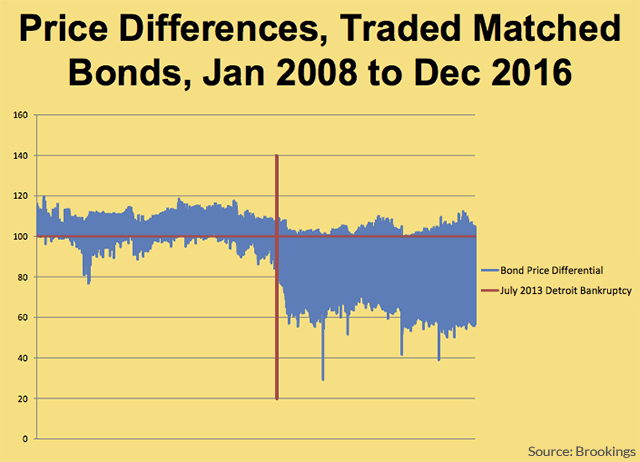 But as acknowledged by the researchers, and expanded on by some of the audience members reacting to the presentation of their paper at the Brookings Institution Tuesday, there are a lot of variables that influenced the complicated situation in Puerto Rico, not just an assumed bailout.

Among the most important may have been that most municipalities have the ability to file for Chapter 9 bankruptcy, as Detroit did. Puerto Rico, as a U.S. territory, does not – the restructuring it is pursuing now is ad hoc.

Several audience members also noted that Puerto Rico bonds may have simply fallen into one or another category common to dubious investments, such as the “greater fool” theory. Alternately, some investors may have already put so much money into Puerto Rico that they saw no way forward but to double down on that investment thesis. Still others may have thought that yields had finally started to creep high enough that even if they had to take a haircut, their total return would still be positive.

For all those reasons, it’s hard to pinpoint the exact contribution of a “Treasury put” to keeping Puerto Rican bond yields so out of line with what turned out to be very real, and very obvious, risk. Still, the researchers try to quantify how much of a premium a perceived Treasury backstop gives to other troubled, if not distressed, municipalities, such as Illinois, New Jersey, and Kentucky.

Read: Here’s why muni-bond demand could get a lift from bank legislation