Jobs growth has been on a tear in recent years, with the unemployment rate nearing historic lows. While investors may cheer that, Charles Schwab’s chief market strategist Liz Ann Sonders is warning that the low unemployment rate could be a sign of pain to come to the stock market.

“Investors should use the unemployment rate as a stock market indicator,” said the strategist from The Charles Schwab Corporation (SCHW) in an interview. “You want to buy stocks when it’s high and sell when it’s low.”

When it comes to looking at job numbers to get a sense of where the economy and stocks may be heading, Sonders said that the unemployment rate is a lagging indicator, while payroll growth is known a coincident indicator, which means that it tends to move in line with the economy, and stocks are the leading indicator. While investors may think that stocks will march higher as more people enter the workforce, Sonders said the benefit is typically already priced into equities. “Sometimes there are odd connections between economic fundamentals and the stock market,” said Sonders. “Better or worse matters more than good or bad.”

[TradeStation is a powerful tool to take your trades to the next level. Read Investopedia’s TradeStation review to explore your options.] 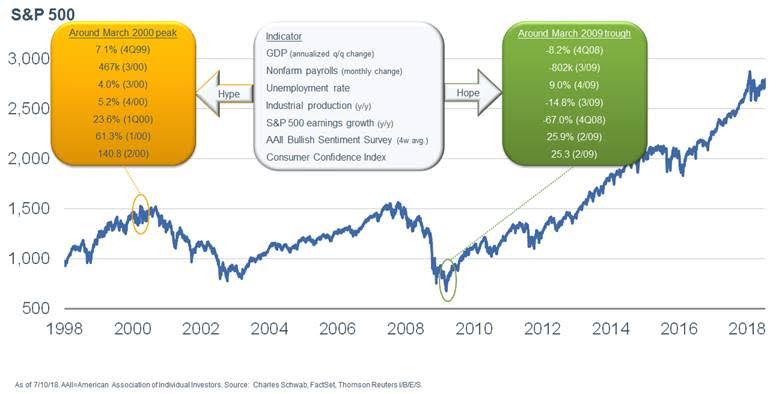 Recession Isn’t in the Cards Yet

Fast forward to 2018, and Sonders said that investors are wrong to bet that job growth has bottomed, even though the unemployment rate reported earlier in July saw an increase to 4% from 3.8% in the prior month. After all, she said that one of the reasons for the increase in the unemployment rate is the steady uptick in job openings, which is prompting more people to look for work. “For the first time in the history of the Job Openings and Labor Turnover Survey (JOLTS), there are more job openings than there are people unemployed,” said the strategist. “There has never been a case in the post-World War II period when the three-month moving average of the unemployment rate has risen by more than one-third of a percentage point without a recession ensuing.”

Sonders said that the economy still hasn’t reached that point yet, although investors should be mindful of the potential. She pointed to other leading indicators outside of the unemployment rate that have continued to accelerate, such as growth in earnings and manufacturing orders. But as it becomes harder for corporations to lodge the double-digit earnings growth they have been achieving and as monetary policy tightens around the world, investors may want to start looking for more signs that it doesn’t get much better from here.

“Part of the reason sentiment is a contrarian indicator is we live in a world of absolutes. We see great job growth, healthy earnings growth and say this is great,” said Sonders. However, the problem is that the market has “already captured most and in some cases all of it.”