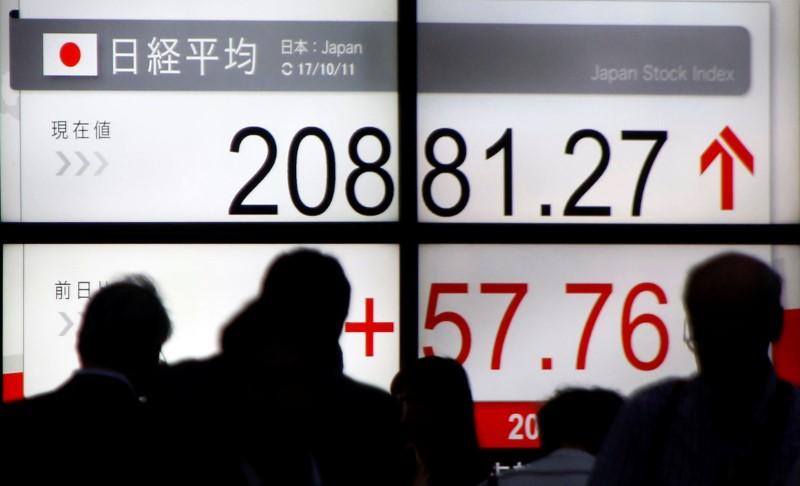 TOKYO (Reuters) – The U.S. dollar inched lower against a basket of currencies on Wednesday as its recent rally on concerns over escalating trade tensions showed signs of fading, while the offshore yuan held firm near a one-week high.

People walk past an electronic board showing Japan’s Nikkei average outside a brokerage in Tokyo, Japan October 11, 2017. REUTERS/Toru Hanai/File Photo

The dollar was a touch lower even after the U.S. Trade Representative’s office said late on Tuesday that the U.S. would begin collecting 25 percent tariffs on another $16 billion in Chinese goods later this month.

The move is the latest by U.S. President Donald Trump to put pressure on China to negotiate trade concessions after imposing tariffs on $34 billion in goods in July. China has vowed to retaliate to an equal degree.

In early trade on Wednesday, the dollar was down about 0.1 percent down on the day against a basket of six currencies .DXY, trading at 95.133. Overnight, it had dropped about 0.4 percent before retracing some losses.

“If there are clear signs of a slowdown of the U.S. economy due to the tariffs imposed in July, then I think the market will begin to price in slower rate hikes or no rate hikes by the Federal Reserve.”

Since mid-April, the dollar index has risen more than 6 percent, as the Federal Reserve raised interest rates, supporting dollar-buying.

In early trade on Wednesday, China’s offshore yuan and the Australian dollar were firm against the dollar.

The Aussie AUD=D3 gained 0.1 percent to $0.7431 against the greenback. Overnight, it had rallied more than half-a-percent before giving up some gains.