Home » Economy » Ed Yardeni: That flawless predictor of recession and a bear market is wrong this time 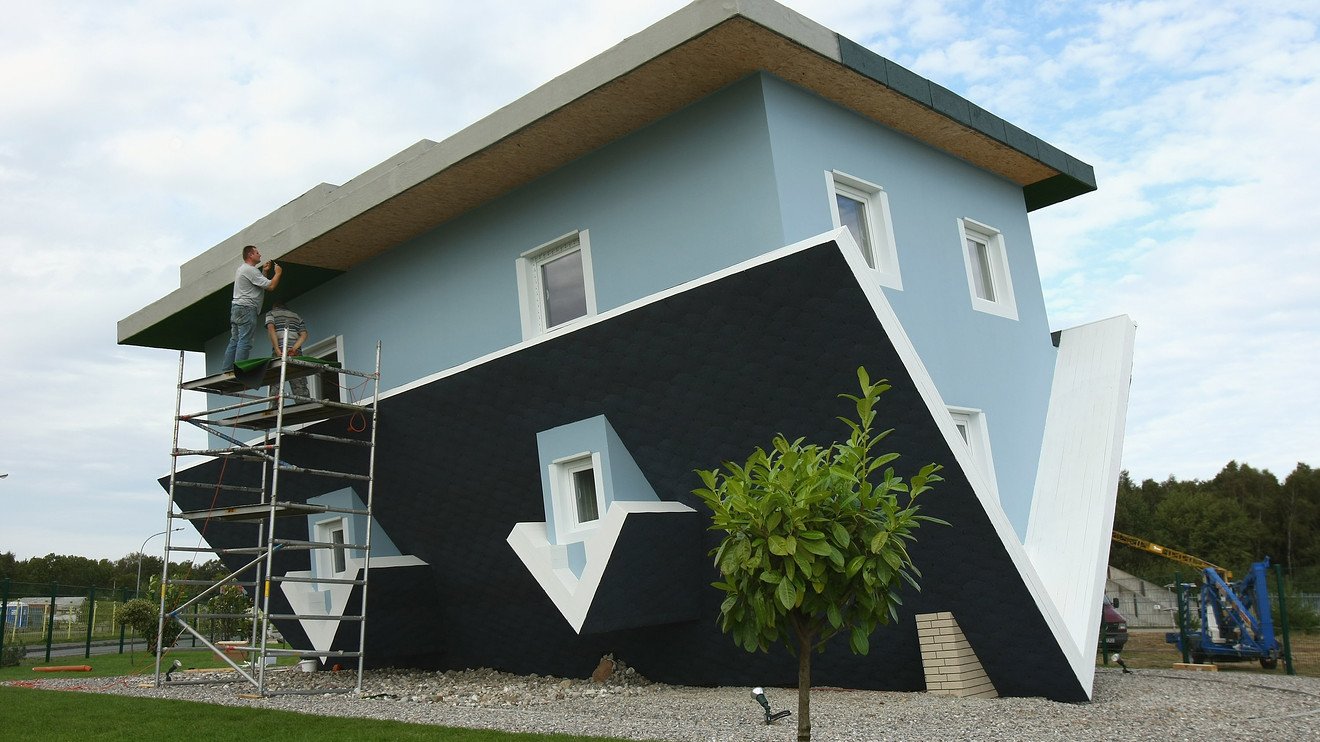 Ed Yardeni: That flawless predictor of recession and a bear market is wrong this time 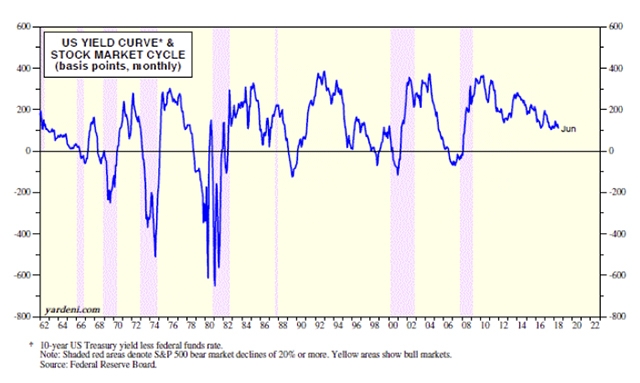 The yield curve is commonly measured as the spread between the 10-year U.S. Treasury bond yield and the federal-funds rate (Fig. 1). This spread has narrowed significantly since the start of this year, raising fears of an imminent recession and a bear market in stocks (Fig. 2). That’s because in the past, the yield curve spread has flattened (i.e., narrowed) and then inverted (i.e., the bond yield was below the federal-funds rate) immediately preceding the past seven U.S. recessions.

Recessions cause bear markets in stocks, which is why the yield curve has received lots of buzz recently (Fig. 3). A Google Trends search on “yield curve” for the past five years shows a trendless series through the end of 2017, followed by an upward-trending series so far this year with a spike in June.

A higher short-end of the yield curve than long-end suggests that investors expect interest rates to decline, which usually happens just before recessions. Is the yield curve about to invert? If it does, will that mark the eighth time in a row that this indicator accurately predicted a recession and a bear market in stocks?

Read:  To invert or not to invert? That is the Fed’s question

It’s hard to argue with success like that. Moreover, it’s always unsettling when arguments are made for why “this time is different.” Nevertheless, here goes. Consider these reasons:

1. One of 10:  In my new book Predicting the Markets, I observe that the yield curve spread is actually one of the 10 components of the Index of Leading Economic Indicators (LEI), which is deemed to provide a recession warning roughly three months before one starts. A list of the 10 can be found on The Conference Board’s website. Among the 10 are the S&P 500 SPX, +0.35% , initial unemployment claims, and measures of consumer and business confidence. Collectively, they’ve pushed the LEI up by 6.1% over the past 12 months to yet another new record high during May (Fig. 6). So the LEI certainly isn’t sounding a recession alarm.

2. Credit crunches:  In the past, the Fed would raise the federal-funds rate during economic booms to stop an acceleration of inflation. Fed officials did so aggressively, perhaps in no small measure to shore up their credibility as inflation fighters. Tightening credit market conditions often triggered a credit crunch — particularly during the 1960s and 1970s, when interest-rate ceilings on bank deposits were set by Regulation Q — as even the credit-worthiest of borrowers found that bankers were less willing and able to lend them money (Fig. 7).

Sensing mounting stress in the credit markets, and expecting the credit crunch to cause a recession and a bear market in stocks, investors would pile into Treasury bonds (Fig. 8). The yield curve inverted, accurately anticipating the increasingly obvious chain of events that ensued — i.e., rising interest rates triggered a credit crisis, which led to a widespread credit crunch and a recession, causing the Fed to lower short-term interest rates.

3. No boom, no bust:   So how can we explain the flattening of the yield curve during the current business cycle? Inflation remains relatively subdued, having risen to the Fed’s 2.0% target (measured by the personal consumption expenditures deflator excluding food and energy on a year-over-year basis) during May — for the first time since the target was explicitly established by the Fed on January 25, 2012 (Fig. 9).

The Fed has gradually been raising the federal funds rate since late 2015, yet few critics charge that the Fed is behind the curve on inflation and needs to raise interest rates more aggressively. The economy is performing well, but there are few signs of an inflationary boom or major speculative excesses that require a more forceful normalization of monetary policy.

4. Globalized bond market:  The flattening of the U.S. yield curve, from my perspective, is mostly attributable to the negative-interest policies of both the European Central Bank (ECB) and the Bank of Japan (BOJ) (Fig. 10). The ECB first lowered its official deposit rate to below zero on June 5, 2014. The BOJ lowered its official rate to below zero on January 29, 2016. Those rates, which remain slightly below zero, have reduced 10-year government bond yields to close to zero in both Germany and Japan since 2015 (Fig. 11).

Such yields certainty make comparable U.S Treasurys highly attractive to investors — especially when the U.S. dollar DXY, +0.22% is strengthening, as has been the case this year (Fig. 12). When investors turn defensive and want to park their money in a safe asset, the U.S. Treasury bond clearly offers a more attractive return than German bunds and Japanese JGBs. 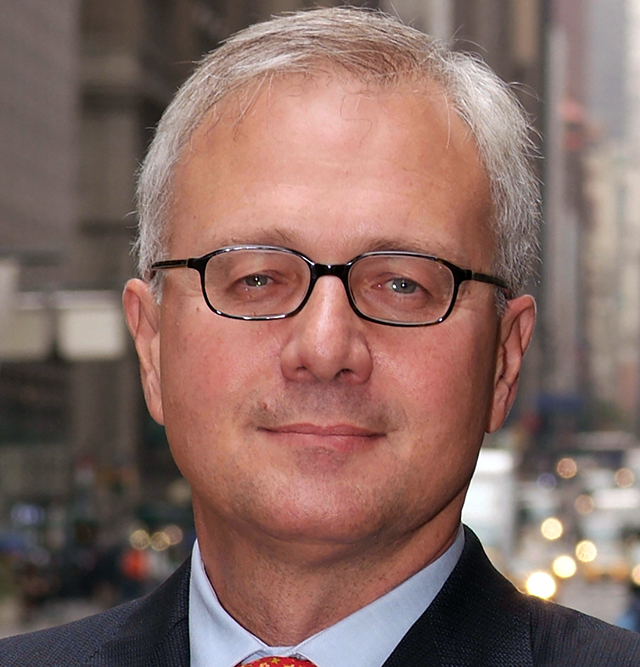 5. Bond vigilantes:  In other words, the U.S. bond market has become more globalized, and is no longer driven exclusively by the U.S. business cycle and Fed policies. In my book, I discuss the close correlation between the 10-year Treasury bond yield and the growth rate of nominal GDP, on a year-over-year basis (Fig. 13 and Fig. 14). The former has always traded in the same neighborhood as the latter. I call this relationship the “Bond Vigilantes Model.” The challenge is to explain why the two variables aren’t identical at any point in time or for a period of time. Nominal GDP rose 4.7% during the first quarter of 2018 and is likely to be around 5.0% during the second quarter, on a year-over-year basis. Yet the U.S. bond yield is below 3.0%.

During the 1960s and 1970s, bond investors weren’t overly vigilant about inflation and consistently purchased bonds at yields below the nominal GDP growth rate. They suffered significant losses. During the 1980s and 1990s, they turned into inflation-fighting Bond Vigilantes, keeping bond yields above nominal GDP growth. Since the Great Recession of 2008, this Wild Bunch has been held in check by the major central banks, which have had near-zero interest-rate policies and massive quantitative easing programs that have swelled their balance sheets with bonds. Meanwhile, powerful structural forces have kept a lid on inflation — all the more reason for the Bond Vigilantes to have relaxed their guard.

As noted above, a global perspective certainly helps to explain why the U.S. bond yield is well below nominal GDP growth. So this time may be different for the bond market, which has become more globalized and influenced by the monetary policies not only of the Fed but also of the other major central banks.

6. Another Fed model. The latest minutes of the June 12-13 FOMC meeting offers another reason not to worry about the flattening yield curve. During the meeting, Fed staff presented an alternative “indicator of the likelihood of recession” based on research explained in a June 28 FEDS Notes titled “(Don’t Fear) The Yield Curve” by two Fed economists. In brief, they question why a “long-term spread” between the 10-year and 2-year Treasury notes should have much power to predict imminent recessions. As an alternative, they’ve devised a 0- to 6-quarter “near-term forward spread” based on the spread between the current level of the federal-funds rate and the expected federal-funds rate several quarters ahead, derived from futures market prices (Fig. 15).

The note’s authors stress that the long-term spread reflects the near-term spread, which they argue makes more sense as an indicator of a recession that is expected to occur within the next few quarters. They also observe that an inversion of either yield spread does not mean that the spread causes recessions.

Their current assessment is that “the market is putting fairly low odds on a rate cut over the next four quarters,” i.e., 14.1% (Fig. 16). “Unlike far-term yield spreads, the near-term forward spread has not been trending down in recent years, and survey-based measures of longer-term expectations for short term interest rates show no sign of an expected inversion.”

What a relief! Now, all we have to worry about is a recession caused by a trade war. 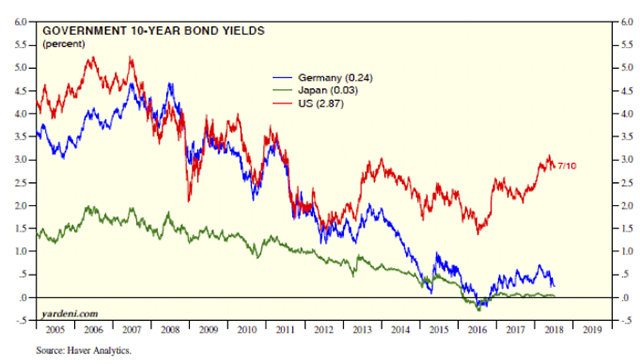 Ed Yardeni is president of Yardeni Research, Inc., a provider of global investment strategy and asset allocation analyses and recommendations. He is the author of “Predicting the Markets: A Professional Autobiography”. (2018). Follow him on Twitter and LinkedIn.