The numbers: A measure of the U.S. economy from the Chicago Federal Reserve slowed in July from June’s robust performance, owed in large part to lighter output at the nation’s factories.

The Chicago Fed’s index of national economic activity registered at a positive 0.13 last month, down from an upwardly revised positive 0.48 in June.

The swings put added emphasis on following the index’s less-volatile, three-month moving average. It edged down to positive 0.05 in July from an upwardly revised positive 0.20 in June.

The Chicago Fed index is a weighted average of 85 economic indicators, designed so that zero represents trend growth and a three-month average below negative 0.70 suggests a recession is underway. Thirty-six of the 85 individual indicators made positive contributions in July, while 49 made negative contributions. Thirty-four indicators improved from June to July, while 51 indicators deteriorated. 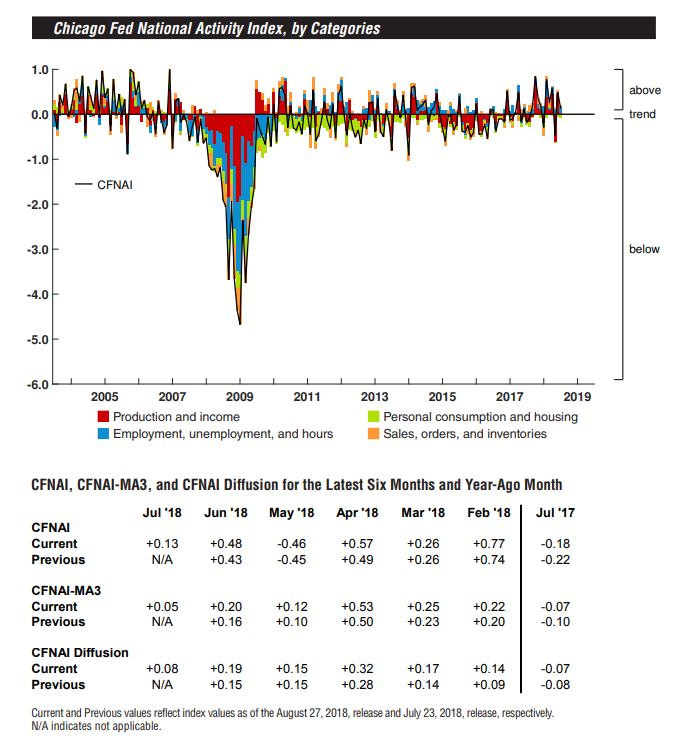 The details: Production-related indicators, meaning factories, contributed a positive 0.05 in July, down sharply from a positive 0.45 in June. The reading reflects the results of the latest industrial production report from the Federal Reserve and the Institute for Supply Management’s new-orders index, which decreased to 60.2 in July from 63.5 in June.

The contribution of the personal consumption and housing category was a negative 0.07 in July from negative 0.06 in June. New-home sales dropped to a nine-month low as the housing market starts to wobble.

Elsewhere, the employment-related indicators contributed positive 0.12 to the Chicago Fed’s national index in July, up from positive 0.03 in June. Labor Department data earlier this month revealed the unemployment rate ticked down to 3.9% in July from 4% in June.

Market reaction: U.S. stocksSPX, +0.60% had little to no reaction to the downbeat headline number as Wall Street showed its willingness to test record territory.