Home » Economy » Get out of the way: Why CEOs are uniting against Trump’s election fight

President Donald Trump has had no more prominent supporter on Wall Street than Stephen Schwarzman, the chief executive officer of the Blackstone Group. Yet on Monday (US time), he said it was time for the president to accept the outcome of the election. And Schwarzman is not alone. His voice is joining a chorus of CEOs.

When Dave Calhoun took over as CEO of Boeing late last year, Yahoo Finance noted that since 2017 he had contributed $US64,000 ($87,880) to various Republican candidates and committees. "He didn't contribute to any Democratic candidates or committees over that period," the website added. 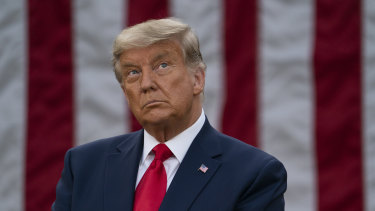 CEOs are pushing Trump to accept the election outcome so the economy can start to repair itself.Credit:AP

Yet on Friday, as Trump continued his futile but damaging effort to overturn election results, Calhoun's company issued a statement that said bluntly, "We look forward to working with the Biden administration," according to the New York Times.

Tom Donohue, the longtime president of the US Chamber of Commerce, is the person most responsible for moving the business organisation from a centrist position to a staunch ally of the Republicans. Yet there he was last Thursday, sending a statement to the news website Axios in support of Biden. "Vice President Biden was fairly elected as our next president, and it's time for the transition to proceed," Donohue said.

CEOs dislike few things as much as openly wading into politics. Making a statement of any sort will inevitably upset customers – or at least those customers who disagree. After Nike built an advertising campaign around Colin Kaepernick, the former professional quarterback whose decision to kneel during the National Anthem sparked a movement, conservatives called for a boycott of the shoe company. And just last month, anti-Trump partisans called for a boycott of Goya Foods after its CEO, Robert Unanue, appeared in the Rose Garden and said that the US was "truly blessed" to have Trump as its president.

Three weeks after the election, though, far more CEOs have acknowledged the president-elect – and called on the Trump administration to begin the transition – than Republican senators and representatives. The Business Roundtable congratulated "the incoming Biden administration" soon after the Associated Press called the election for Biden.

CEOs are realists; if they weren't, they wouldn't have the job. They can see that Trump has no chance of overturning the election and that they'll be dealing with a new Democratic administration soon enough. But getting on the right side of the Biden team is not the main reason they are speaking out. For them, there are two far more compelling reasons.

The first is COVID-19. The business community is as focused on the pandemic as everyone else – perhaps more so because of how the virus has affected their operations, their employees and their profits. Eight months into the crisis, with no new rescue package emerging from Congress, mass layoffs are in the offing. While some businesses such as Amazon.com have thrived, many others have been devastated, particularly airlines and hotels. CEOs absolutely understand that until the pandemic has ended, the economy will continue to suffer.

They also understand that Trump's refusal to concede and begin the transition process is not helping to resolve the pandemic. They know how urgent it is for Biden's transition team to be involved in planning for the distribution of the vaccine. They would like to see presidential leadership on issues such as wearing masks, taking hold of the distribution of protective equipment for hospitals and carrying out other measures. CEOs are pressing for the transition to begin because it has become important for the short-term future of their companies. And they are hoping that the urgency of their statements will push more Republicans to press the president to begin the transition. 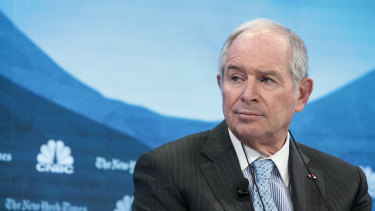 Stephen Schwarzman has bene one of Trump’s biggest supporters on Wall Street, but he has added his voice to a chorus of CEOs pushing for Trump to accept the outcome of the election. Credit:Bloomberg

But there's another reason, too. Most CEOs are patriots. It's been widely reported that almost as soon as it became clear that Trump was going to try to overturn the election results, several dozen CEOs held a Zoom meeting led by Jeffrey Sonnenfeld, the well-known Yale School of Management professor.

"Their anxiety was off the charts," Sonnenfeld told me. "Yes, they didn't want Trump's actions to destabilise the markets, but more importantly, they didn't want a divided work force or a divided customer base." They were concerned about their companies – but they were also concerned about their country. Axios described this as an example of CEOs "filling the D.C. leadership vacuum."

In some ways, Biden is going to be better for business than Trump – offering more stability and fewer about-faces and surprises. In other ways, he'll be tougher. He'll seek higher corporate taxes and increased regulations. But all that can be dealt with after January 20. For now, business needs Trump to get out of the way, and CEOs aren't afraid to say so.

Joe Nocera is a Bloomberg Opinion columnist covering business. He has written business columns for Esquire, GQ and the New York Times, and is the former editorial director of Fortune. His latest project is the Bloomberg-Wondery podcast 'The Shrink Next Door.'