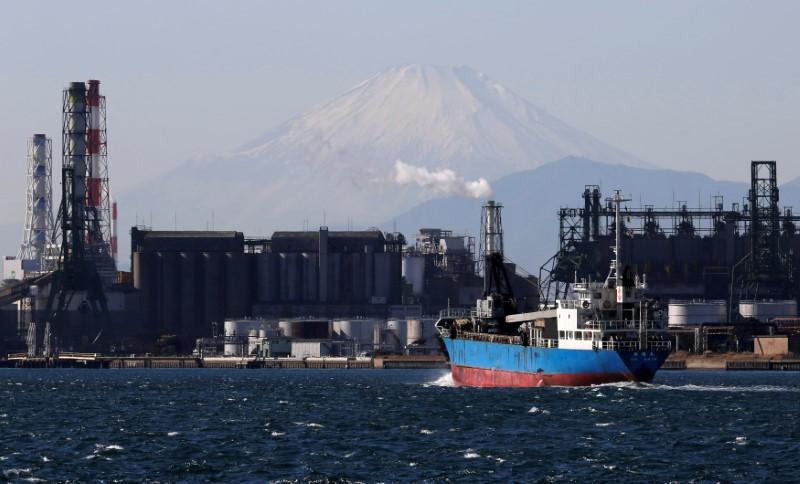 TOKYO (Reuters) – Japanese manufacturing activity expanded at the slowest pace in over 1-1/2 years in July, a preliminary private survey showed on Tuesday, in a worrying sign an intensifying global trade war is starting to put the brakes on major exporting economies.

The flash Markit/Nikkei Japan Manufacturing Purchasing Managers Index (PMI) fell to a seasonally adjusted 51.6 in July from a final 53.0 in June.

The index remained above the 50 threshold that separates expansion from contraction for the 23rd consecutive month but declined to the weakest level since November 2016.

“Flash survey data pointed to a slowing of growth momentum for Japan’s manufacturing sector at the beginning of the third quarter, following a robust performance so far this year,” said Joe Hayes, economist at IHS Markit, which compiles the survey.

“New business grew at a much weaker rate and was broadly flat, while export demand, despite further yen depreciation, deteriorated for a second month running.”

There wasn’t much encouraging news for new export orders either, which shrank for the second month though the pace of contraction slowed to a preliminary 49.7 from a final 48.9 in June.

Overall, the PMI result portends a darkening outlook as a U.S.-driven international trade war embroils major economies from China to Canada to the euro zone and threatens to dent Japan’s export-oriented manufacturing sector.

A Reuters poll showed earlier this month that Japanese business sentiment slipped in July, reflecting companies’ fear of fallout from the intensifying trade dispute between the United States and China.

Japan’s economy is expected to bounce back from a contraction in the first quarter, but exports could falter and companies forced to cut business investment if the United States seeks concrete measures from Japan to lower its trade surplus.