New Zealand in recession on back of historic GDP fall

New Zealand has fallen into a recession after its June quarter GDP fell by 12.2 per cent.

The decline covers most of the period between the end of March and mid-May, when the whole country spent seven weeks in level 4 and level 3 lockdowns. The decline in GDP per capita was even higher, at 12.6 per cent in the quarter, due to population growth. 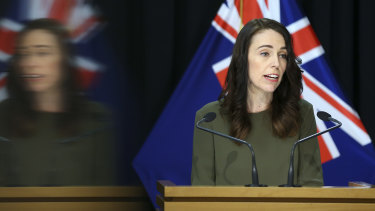 It's the second-straight quarter of negative growth, the technical definition of entering a recession.

ASB said the huge fall was close to its own estimate of a 11 per cent decline and "market expectations" of a 13 per cent drop.

New Zealand is one of the last developed countries to calculate the decline in its second-quarter GDP. The average fall in GDP across the OECD has been 10.6 per cent.

Australia and the United States have fared better than most with declines of 7 per cent and 9.1 per cent, respectively, while the average drop so far in Europe is 12.4 per cent.

Worst hit has been the UK, where the economy shrank a horror 20.4 per cent during the same period.

The OECD had forecast very early on in the crisis in April that the trade and tourism exposed New Zealand economy would suffer one of the heaviest initial hits from COVID-19, forecasting a 30 per cent drop in activity, versus a 22 per cent decline in Australia and a 25 per cent GDP drop in the United States. However, it later revised up its global forecasts.

Stats NZ senior manager Paul Pascoe confirmed the 12.2 per cent fall in quarterly GDP was by far the largest since comparable records started in 1987.

Some industries were more affected than others by the border closure and alert levels restrictions, the department said.

"Industries like retail, accommodation and restaurants, and transport saw significant declines in production because they were most directly affected by the international travel ban and strict nationwide lockdown," Pascoe said.

"Other industries, like food and beverage manufacturing, were essential services and fell much less."

The decline in the construction sector was 25.8 per cent, while manufacturing fell by 13 per cent.

Stats NZ said the fall in production was paralleled by declines in household spending, which fell 12.1 per cent over the quarter.

Stats NZ often revises its estimates of GDP over time, and BNZ warned this week that the changes that might be made to the second-quarter figures could be larger than usual.

"This quarter is clearly not business-as-usual and there is generally a higher level of uncertainty associated with measuring such significant changes in economic activity," he said.

But Stats NZ had used "extra data and careful analysis" to minimise the uncertainty and provide a reliable first estimate, he said.

The Reserve Bank had forecast a worse, 14.2 per cent drop in GDP.

But BNZ said on Monday that it doubted "a surprise either way" would have much impact on its assessment on future monetary policy, as it was "more worried about the future than the past".

Joe Biden Gets Formal POTUS Endorsement From Cindy McCain; Republican Sen. John McCain Ran Against Ex-VP & Obama In 2008
We and our partners use cookies on this site to improve our service, perform analytics, personalize advertising, measure advertising performance, and remember website preferences.Ok