Home » Economy » ‘OK boomer’? Instead of a generational war, let’s fight the rich!

‘OK boomer’? Instead of a generational war, let’s fight the rich!

Generations are pretty bogus. The labels we use to casually slice up society — boomer, millennial, Gen X, Gen Z — are a nearly useless way of thinking about politics, culture or business. The very idea that tens of millions of people across different classes and races and geographies might hold similar views on a range of subjects just because they happened to be born during the same 20-year span of history — the whole thing sounds a bit too much like astrology, doesn't it?

In fact, demographers, whose profession came up with these labels, constantly stress the limitations and complications of generational analysis. Generations can be useful for observing broad-scale changes in attitudes over long periods of time, but they break down into clichés and stereotypes when they are used to make specific observations about the world.

Marketers and much of the media tend to be quite careless in how we wield generational labels. We invest these categories with too much meaning, often ascribing to generational ideology what is more likely a product of age, wealth and a variety of other factors. 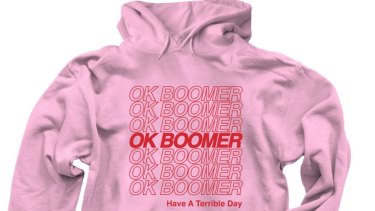 “Ok boomer” has become the catch-cry of a generation. But why not say “ok biillionaire” instead?Credit:via Shannon O’Connor

Consider, for instance, the absurd parade of stories about how millennials are "killing" various industries, from golf to wedding rings. They collectively paint young people as being somehow philosophically deficient as consumers rather than simply not very wealthy.

Of course, I would dismiss generations: I'm a Gen Xer, and our whole thing is rejecting labels.

On the other hand, I might be a boomer, because lately I've been nursing a crazy conspiracy theory about generational analysis: I think it's a plot by The Man to keep us from changing the world. Focusing on generational differences distracts the masses from going after more salient differences in society — especially the power held by the wealthy, whatever their age.

All of this explains why I'm not really OK with "ok boomer," the latest rallying cry in the permanent war between the Young and the Old. As Taylor Lorenz reported in The New York Times last week, "ok boomer" is a meme started by teenagers to shred older people who express a broad range of antiquated ideas about the world. (The grammar snoot in me — and my copy editor — would prefer the meme rendered as "OK, boomer," with periods and a comma, but of course that's not how teenagers write.)

At first glance, the phrase — which, since Lorenz's report, has been co-opted and repeated into cringing ubiquity by just about every other generation — is the perfect response to your racist grandpa on Facebook and your liberal uncle on Wall Street who is very worried about public health insurance for all. It's knowing, cutting, dismissive and almost impossible to gracefully recover from "ok boomer" and you're done.

At the risk of sounding like a patronising Old, I'll concede that "ok boomer" means well, and I don't begrudge teenagers their anger. They are certainly right that over several generations and across political ideologies, the holders of political and economic power in the US totally screwed things up for the future. Boomer leaders (and their forebears) underinvested in long-term infrastructure and safety nets and economic and environmental rules. They overindulged in wars and tax cuts and systemic deregulation. They long overlooked racial and gender bias, sexual harassment and just about every other form of systemic discrimination. They brought the country and the world to the sorry place we're in now.

Yet it's a mistake to blame all boomers for the sins of the most powerful among them. As a taunt, "ok boomer" overlooks the vast differences within the postwar generation; there are rich boomers and poor boomers, far-left boomers and far-right ones, boomers who are fighting for right and those who are hopelessly stuck in yesteryear. And "ok boomer" lets other generations off the hook, neglecting the facts that millennials keep gaining greater economic and political power and that some of them are starting to act and sound like archetypal boomers.

Instead of "ok boomer," how about "ok billionaire"?

Teenagers themselves seem to recognise this: "boomer is state of mind," Lorenz writes of how the young think of the term. On the phone, she pointed to further evidence of the flexibility of "boomer" as a taunt. On Twitter, she notes, Pete Buttigieg, the youngest of the 2020 Democratic US presidential candidates, is frequently dismissed as radiating big boomer energy.

Even though he's a millennial, there's something about his rhetorical style that feels antiquated. And Buttigieg's boomerishness only underlines the hollowness of the whole idea of generational stereotyping. It suggests a more profitable political path for young people: Instead of cancelling an entire generation, why not set your sights on a smaller, more specific group, one that bears more direct complicity in our society's widening dystopia?

Yes, I'm talking about the wealthy. Instead of "ok boomer," how about "ok billionaire"?

I've been preoccupied with billionaires for much of the year. In February, I argued that we should "abolish" billionaires and wannabe billionaires because they exert outsize control over America's resources. Insofar as they highlight the unforgivable ways that wealthy people have rigged the political system, billionaires are both a convenient and an appropriate political target of the moment.

On just about any important issue of the day, from climate change to mass incarceration to defeating President Donald Trump, meaningful political change will come about only through cross-generational coordination. It will require concerned people of all ages to band together to alter the status quo.

One reason this is difficult in the US is, we've been conditioned to think that people who are much older or younger than we are might be completely alien beings: Every millennial is an avocado-eating virtue signaller who won't listen to opposing views; all boomers are white, affluent, selfish racists who can't recognise their privilege; and the two sides will never see eye to eye on anything.

But that is plainly false. Last month, Democractic congresswoman Alexandria Ocasio-Cortez, who's 30, endorsed 78-year-old Bernie Sanders for president — not despite his age, but because Sanders'"decades of work" on progressive causes was a sign of his fidelity to the movement. 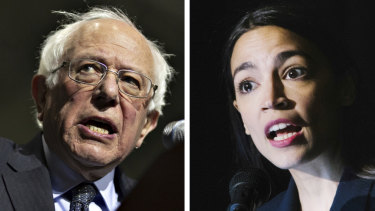 Bernie Sanders has been endorsed by Alexandria Ocasio-Cortez for his “decades of work” on progressive causes.Credit:Bloomberg, AP

Earlier this year, Ocasio-Cortez met Greta Thunberg, the Swedish teenage climate activist who has scolded older people for ignoring the issue. Among other things, the pair discussed how age was simply a mindset. "You can be much older and still part of a youth movement if you refuse to do things just because that's the way they've always been done," Ocasio-Cortez told Thunberg.

This is the sort of coalition we need to build a better future — not Gen Z fighting boomers, but a coalition of 16-year-olds and 30-year-olds and 78-year-olds joining together to demolish the rich who run the world today. The stakes are too great; we can't afford to have any generation sit this one out.